A photo of an enormous crowd has been shared thousands of times in multiple posts on Facebook alongside a claim it shows a major political opposition rally in the Pakistani city of Lahore on December 13, 2020. The claim is false; the photo actually shows a rally in Lahore by the current Pakistani ruling party in 2018.

The photo, which shows a crowd gathered at Lahore’s Minar-e-Pakistan monument, was published here on Facebook on December 13, 2020. The post has been shared 1,000 times. 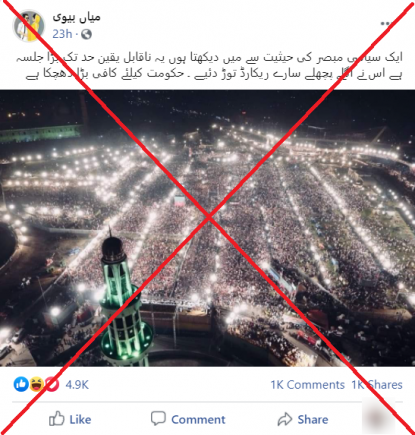 The post’s Urdu-language caption translates to English as: “As a political commentator I see that it is an unbelievably huge rally. It has broken all previous records. It’s a very big jolt for the government.”

The post circulated the same day the Pakistan Democratic Movement (PDM), a major coalition of opposition political parties, held a rally at the Minar-e-Pakistan monument. Pakistani newspaper Dawn reported on the rally here and here.

The photo was also published alongside a similar claim on Facebook here, here, here and here.

A Google reverse image search found the photo in fact shows a political rally at the same venue in April 2018, more than two years before the PDM rally in December 2020.

The photo was published on Facebook here on April 30, 2018, by Pakistan Tehreek-e-Insaf (PTI), the current ruling political party.

Below is a screenshot comparison of the photo in the misleading Facebook posts (L) and the April 2018 post (R):

PTI published more photos from the April 2018 rally in a Facebook album here.