This photo shows a market during India’s Covid-19 lockdown, before the farmers’ protests began

A photo has been shared thousands of times in multiple Facebook and Twitter posts in December 2020 alongside a claim it shows damage that Indian farmers inflicted on food stalls while protesting over new agriculture laws. The claim is false; the photo has circulated online since May 2020 in reports about India’s Covid-19 lockdown.

The photo was published on Facebook here on December 8, 2020. The post has been shared more than 2,600 times. 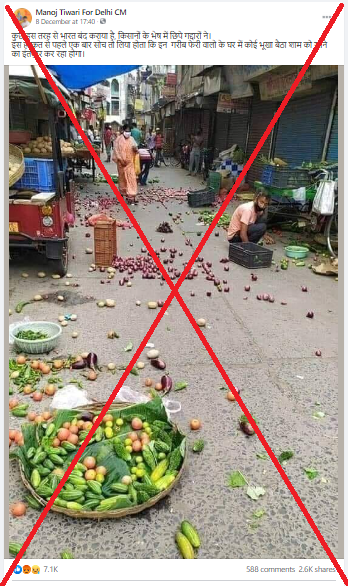 The post’s Hindi-language caption translates to English as: “This is how the traitors hidden in the guise of farmers ensured Bharat Band. They should have thought, at least once, that someone in the house of these poor vegetable-sellers would be hungry and waiting for food in the evening.”

Bharat Band refers to an effort by various farmers groups in India to observe a country-wide shutdown on December 8, 2020. The strike was held during ongoing demonstrations by Indian farmers who are protesting against new agriculture laws, as reported here by AFP.

A reverse image search on Google found the photo was posted here on Twitter on May 5, 2020. It was published by Surendra Rajput, a politician in India’s main opposition Indian National Congress party, about seven months before the Indian farmers’ protests began.

Rajput posted the tweet following the government’s decision to allow shops selling alcohol to remain open during the country’s Covid-19 lockdown in early May, as AFP reported here.

The photo was also shared on Facebook here and Twitter here in posts published between July and September 2020.

The signs in the photo are written in Bangla, the primary language in the Indian state of West Bengal. The second photo shared by the Congress politician also shows a vehicle with a license plate that begins with WB — the standard beginning for plates in West Bengal.

A further search found that the photo was also published in May 2020 on Facebook here, here and here. The posts identify the location of the photo as the Pioneer Market in the West Bengal town of Barasat.