This man was executed for murdering a judge in Iran, not for preaching the gospel in Syria

An image has been shared hundreds of times on Facebook purporting to show a man who was sentenced to death in Syria for preaching the gospel. The claims are false; the picture is of Majid Kavousifar, an Iranian man who was convicted of assassinating a judge in Iran.

The image has been shared more than 300 times in multiple Facebook posts, including here, here and here.

It shows a man smiling and waving, with a blue noose attached to a crane and draped around his neck.

“This guy was sentenced to death in Syria for preaching the Gospel,” reads the posts. “He went to the gallows laghing (sic) because he knew his time had come to meet his saviour - Jesus Christ. Do you know Him? Do you have such hope beyond this life that you can laugh in the face of death?”

A reverse image search of the picture leads to articles about two Iranian men being hanged for murder.

An AFP report (reprinted here) from 2007 explains that Majid Kavousifar (the man in the picture) and his nephew Hossein Kavousifar were convicted of murdering an Iranian judge and hanged from cranes in Tehran on August 2, 2007.

The execution took place on the spot where the judge was murdered in August 2005, in the middle of a busy business district. The two gunmen murdered Hassan Moghaddas, who worked at the “guidance” court, which handles sensitive cases of “moral corruption,” when he climbed into his car after work.

According to the AFP report, bystanders stared in fascination as two blue nooses were suspended from five-metre (16 feet) long cranes mounted on the back of two pick-up trucks. 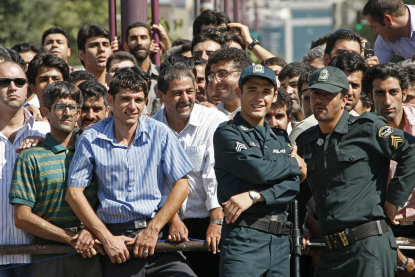 Iranians watch the execution of Hossein Kavousifar and Majid Kavousifar who were hanged in public in central Tehran on August 2, 2007. (AFP / Behrouz Mehri)

“Majid Kavousifar, the mastermind of the murder, showed no remorse, even boldly waving one hand from his handcuffs at his co-conspirator and at the watching crowds,” describes the report. “He made a show of puffing out his chest, grinning to all sides and even chatting to the burly executioner, in an apparent final check of the execution procedure.” 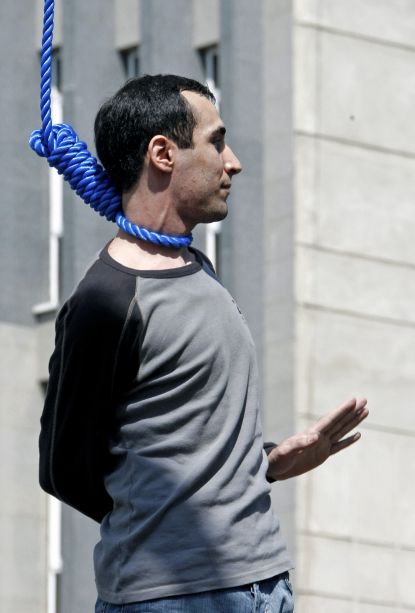 Iranian Majid Kavousifar bids farewell to his relatives before being hanged in public in central Tehran August 2, 2007. (AFP / Behrouz Mehri)

AFP Fact Check has previously debunked claims that other photographs of this execution showed an Algerian hacker who was executed for stealing money from Israeli banks.