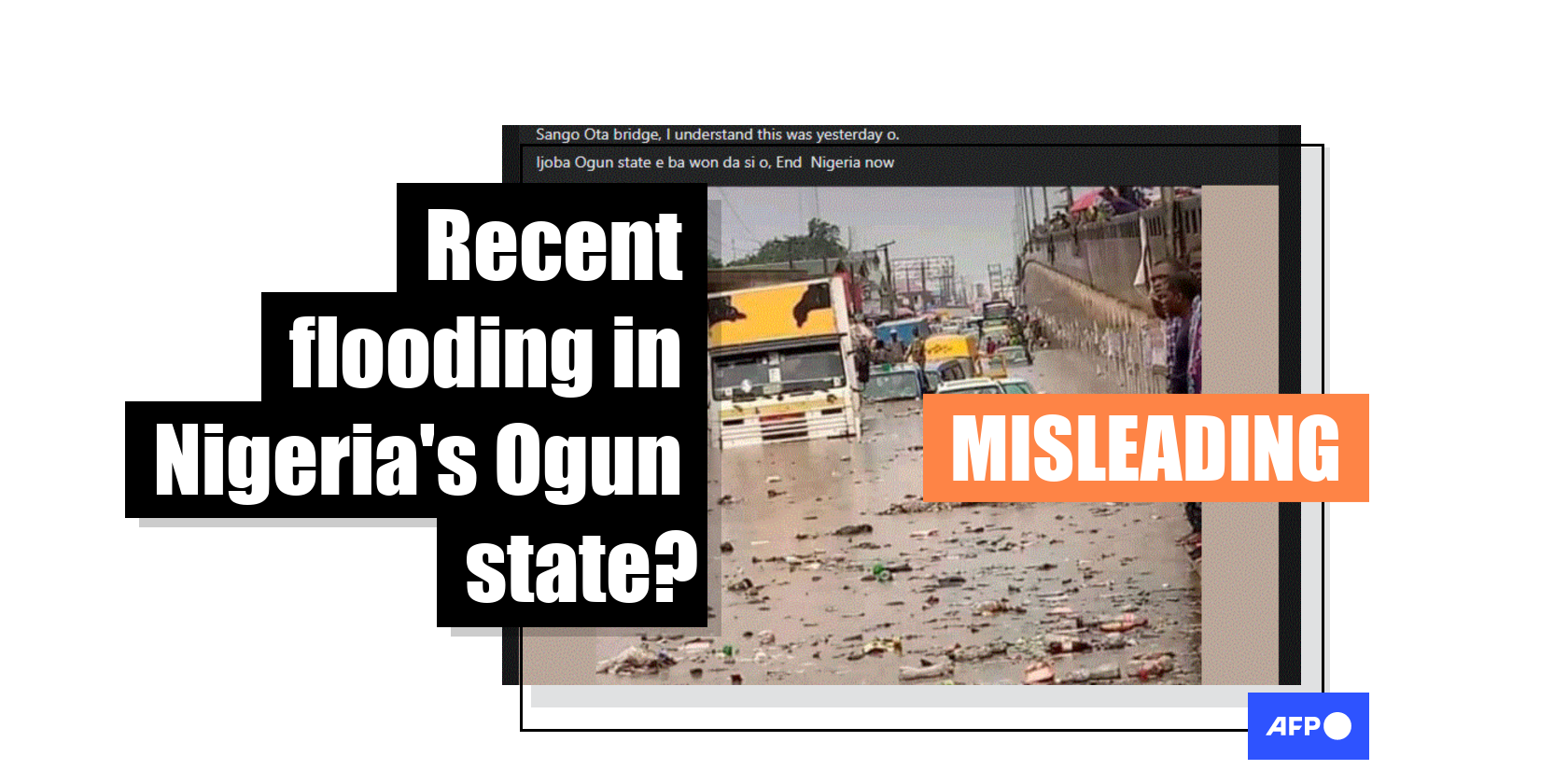 An image of trucks and cars on a flooded road has been shared in multiple social media posts claiming to show a submerged highway in Nigeria’s southern Ogun state following a recent heavy downpour. This is partly false; while the location is correct, the photo has been circulating since at least 2019.

The image appears in numerous Facebook posts, including this one published on March 24, 2021, with more than 500 shares.

“Sango Ota bridge, I understand this was yesterday o (sic),” reads the Facebook post published on a page called “Lady K ifeoluwa show”. It has a history of calling for the secession of the Yoruba nation from Nigeria.

Sango Ota is a town in Nigeria’s southwestern Ogun state and is home to the country’s former president, Olusegun Obasanjo. The majority of inhabitants in the region are Yorubas, a large ethnic group in the west African country.

The rest of the post, translated from Yoruba into English, pleads for the “intervention” of state officials and then declares “end Nigeria now”.

The photo it refers to shows submerged vehicles on a flooded road, and features alongside an almost identical claim in this Facebook post with more than 800 shares, as well as on Twitter.

However, the image has been circulating online for more than a year.

It was reposted on Facebook the next day by Joe Igbokwe, the special adviser to the Lagos state governor for drainage and water resources.

“Sango Bridge after yesterday's rain, this is sign of what the people of that area should be expecting this year except the drainages are cleared. Please tell Ogun State to consult me (sic),” reads Igbokwe’s Facebook post.

In this case, AFP Fact Check confirmed that it actually rained in Sango Ota on March 22, 2021, according to the World Weather Online site.

Furthermore, an AFP journalist in Nigeria confirmed that the photo was indeed taken in the town.

However, the viral image is not evidence of any recent rainfall or flooding.

A Google reverse image search led to this Facebook post and the same picture from September 7, 2019, captioned "Yesterday Rain @ Sango". Five days later, global humanitarian organisation ReliefWeb reported that heavy rainfall in the preceding weeks had caused flooding in some parts of the country.

Flooding has long been an issue in the town. In 2011, residents called on the government to construct drainage to prevent an environmental disaster. Sango Ota’s roads were among those in Ogun and neighbouring Lagos state highlighted by Nigerian daily newspaper The Punch in 2019 during heavy rains.