One day after a deadly stampede, students from Kakamega Primary School in Kenya wait outside their classrooms to be picked up by their parents on February 4, 2020 ( AFP / BRIAN ONGORO)

A video has been shared repeatedly in Facebook posts that claim it shows 13 children who died because of the Covid-19 vaccination in South Africa. However, the claim is false: the video was in fact shot in Kenya in February 2020, months before South Africa rolled out the Covid-19 vaccination programme; The pupils died because of a stampede at their school. Greek-language claim translates to English as: "Thirteen (13) children died from the vaccine in a school in South Africa, but none of the TV channels in global level mentioned it, only on Instagram there are some related posts done, but they are immediately deleted".

The claim was shared alongside a 18-second video that shows the bodies of children lying on the floor, next to each other, while screams of older people can be heard.

However, the claim is false: the video was in fact shot in Kenya in February 2020, months before South Africa began the Covid-19 vaccination; the video depicts children who lost their life because of a stampede at their school.

A reverse image search on Google found the identical video posted here on Facebook on February 3, 2020. Its title reads "Kakamega Primary School Stamped", and the text refers to a "tragedy" that has happened.

Keyword searches found media reports about a stampede that happened at a school of Kakamega, a city located in west Kenya.

The incident took place on February 3, 2020, killing least 13 children and injuring dozens of others, according to this AFP report.

A longer video from the same angle, showing the bodies of the children, was posted on YouTube on February 3, 2020, and its title also reads: "Kakamega primary school pupils scramble". 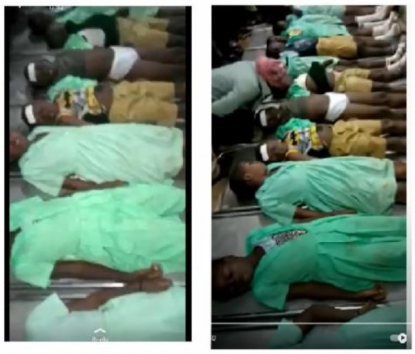 The scene, shot from the different angles, can be seen in this AFP video on February 4, 2020.

The British tabloid Daily Mail also published a report about the stampede, which was accompanied by several pictures by AFP, Reuters and The Standard that show the children in the same light green school uniform, similarly as the children seen in the video on the misleading Facebook post.

South Africa rolled out its Covid-19 vaccination programme on February 17, 2021, according to this BBC report, about year after the incident in Kenya took place.

AFP Fact Check previously debunked the claim that the identical video showed children that were victims of a gas attack, presumably in Zambia.