An American osteopath warns against taking Covid-19 shots, claiming an experiment she conducted revealed a tentacled "object or organism" in Moderna's vaccine. But experts say the experiment was not conducted under appropriate conditions and that its results cannot be verified, and that the doctor's claim that Johnson & Johnson's shot contains graphene is false.

"Dr. Carrie Madej: First U.S. Lab Examines 'Vaccine' Vials, HORRIFIC findings revealed," claims the title of September 29, 2021 a video that has been viewed more than 2.5 million times on video sharing platform Rumble. The clip is a segment from the Stew Peters Show, a program AFP has fact-checked previously for spreading false claims about Covid-19 vaccines.

Madej, an osteopathic doctor, was previously fact-checked by AFP's team in Poland for false claims that the Covid-19 vaccine can alter the human genome.

In the interview with Peters, she claims that she examined a vial of the Moderna Covid-19 vaccine under a compound microscope and saw an "object or organism -- I'm not sure what to call it -- that had tentacles coming from it. And it was able to lift itself up." She further warns: "This isn't supposed to be injected into human beings, especially children." 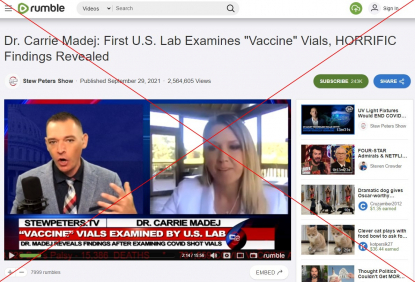 Screenshot taken on October 21, 2021 of a video posted on Rumble 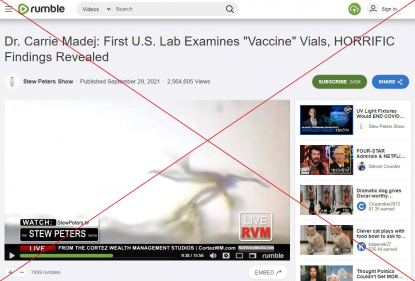 Screenshot taken on October 21, 2021 of a video posted on Rumble

The video spread on Instagram and Bitchute, and circulated with French subtitles. It also led to false claims that the vaccine contains "parasites" which AFP previously debunked.

The video is the latest example of social media posts containing inaccurate claims about vaccines that have spread online as countries seek to immunize their populations against Covid-19.

But several researchers told AFP that the experiment referenced in the video was flawed and could not provide proof that the vaccines contain dangerous ingredients. The claim also lacks credibility because there is no way to independently verify whether Madej actually analyzed vials of the vaccine.

Virginie Serin, a researcher at the Centre d'Élaboration de Matériaux et d'Etudes Structurales and the secretary general of the Société Européenne de Microscopie (EMS), said on October 21 that the claim is bogus and the experiment that Madej described was not conducted with scientific rigor.

She explained that an experiment to evaluate the contents of a vaccine would normally be conducted in a cold, "sterile room, to be sure that no reaction occurs." In the video, Madej describes the reactions she observed happening when the sample reached room temperature.

"This is not a scientific analysis which could give a valid result," Serin said, adding that the video appears to be designed "to manipulate people who have no skills in the field."

The images claimed to be from Madej's microscope were also called into question.

Cell biology professor Philippe Roingeard said on October 19 that the images depict "things that are commonly seen in optical microscopy."

It appears to be the "junk that you regularly see when you observe something on a glass slide. It can be a little dirt or little impurity that gets between the slide and the glass coverslip," or it could be showing "defects" in the glass of the coverslip, he said.

Roingeard, who has published a photo gallery of viruses under the microscope, said that the image from Madej "has nothing to do with the vaccine. You would see the same thing in a drop of tap water." He said that to fully examine the vaccine you would need to use a more powerful electron microscope.

Jose Maria Valpuesta, researcher in biochemistry and molecular biology and president of the EMS, agreed. Anyone who puts a drop of water under the microscope "will be able to see something move," he said in October 2021.

He pointed out that Madej claims to have used a vial of vaccine that was open and had been used once. "Anything could have entered there, dirt could have gotten into it," he said.

Valpuesta summarized the video by saying: "I am absolutely convinced that all this is false, it is not at all an animal, or a creature from space."

Similarly, Jung Jae-hun, who teaches preventive medicine at the Gachon University College of Medicine and Science, said on October 19 that "all vaccines are manufactured in a sterile environment, unadulterated by other pathogens or viruses, let alone whole parasites."

Moderna had not responded to AFP's request for comment by the time of publication.

Madej also said that she observed that her sample changed color when the white light from the microscope hit it, and claims that "superconducting material can do that."

"A superconducting material would be something like an injectable computing system," she adds, claiming that "this is proof that they are putting an operating system inside people."

In the second half of the video, Madej says that she also analyzed a vial of the Johnson & Johnson vaccine and claims: "There's definitely a substance that looked like graphene. They all had graphene-like structures."

The ingredients of the other Covid-19 vaccines authorized for use in the US and Canada (Pfizer-BioNTech, Moderna, and AstraZeneca) are also public and do not include graphene -- a material scientists are looking at for biomedical applications that has sparked concerns about toxicity.

Professor Hong Byung-hee, an expert in nanomaterials at Seoul National University, told AFP in July 2021: "Graphene is being tested for biomedical purposes, including for vaccines, but these applications are still in an experimental phase and a long wait is expected before they become commercially available following clinical trials."

Experts have debunked multiple false claims about graphene in the vaccines.