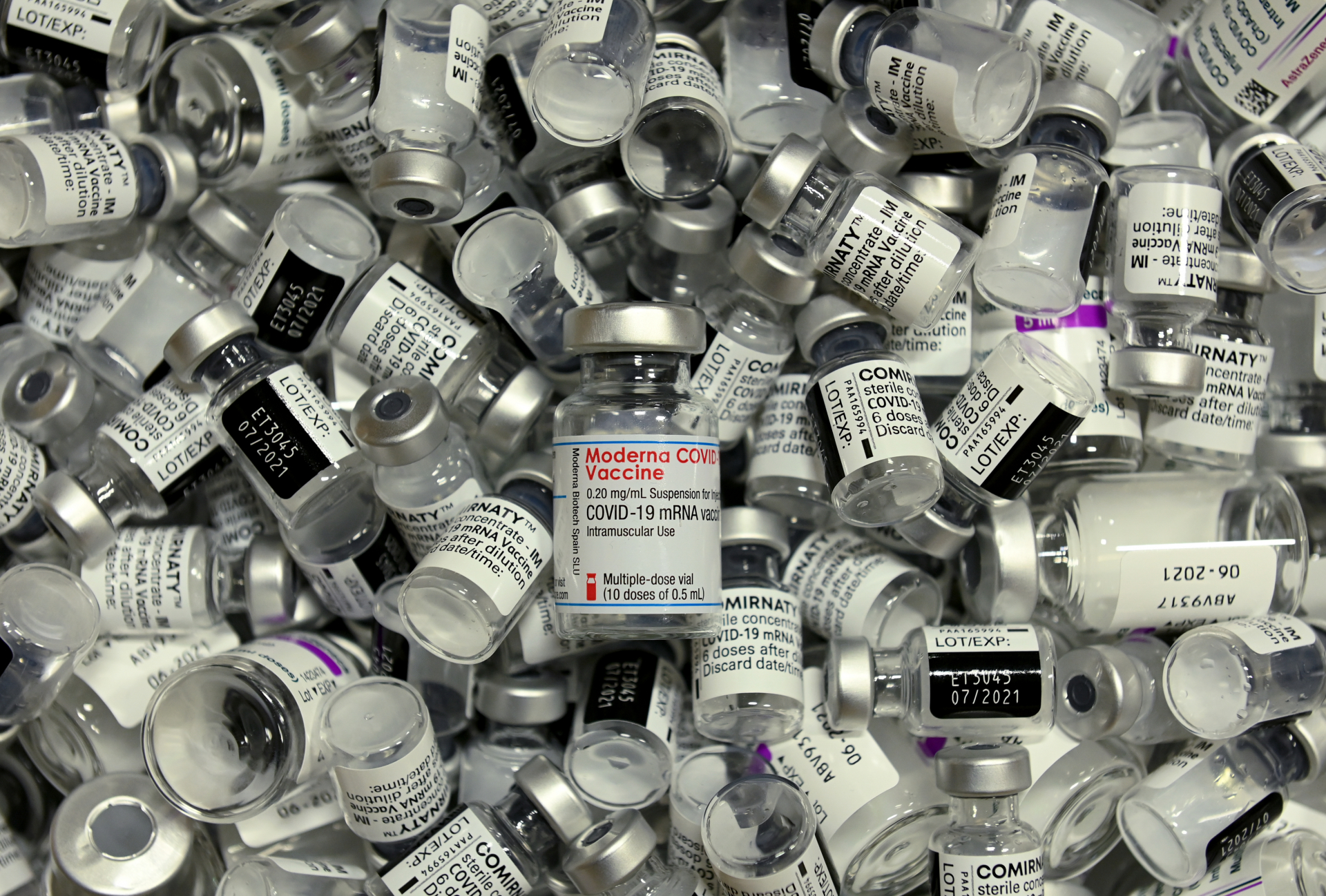 Empty vials of Covid-19 vaccines from Moderna, Pfizer-BioNTech and AstraZeneca are pictured in Rosenheim, Germany, on April 20, 2021 ( AFP / Christof STACHE)

Social media posts share a video of a US pundit claiming that Covid-19 messenger ribonucleic acid (mRNA) vaccines can cause people to develop a "magnetic force" due to a process called magnetofection. This is false; experts say the process is not used in the shots, which do not have magnetic components listed in their ingredients, and the web page about magnetofection used as a proof comes from a German company that says its their work has nothing to do with Covid-19 vaccines.

"EXPOSED! Magnetism INTENTIONALLY Added to 'Vaccine' to Force mRNA Through Entire Body," says the title of a June 7, 2021 clip on Rumble of Jane Ruby appearing on "The Stew Peters Show," where she was introduced as a medical expert. 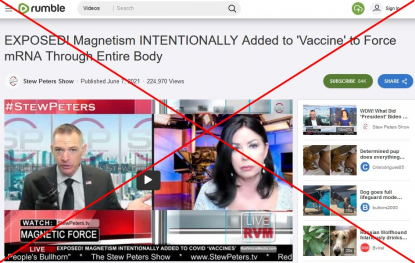 Screenshot taken on July 7, 2021 shows a video on Rumble 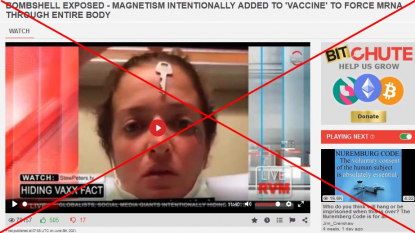 Screenshot taken on July 7, 2021 shows a video on BitChute

The video -- which has been viewed hundreds of thousands of times on Rumble and BitChute -- is part of a deluge of inaccurate claims about vaccines that have spread across the internet as countries around the world seek to immunize their populations against Covid-19.

"They are using magnetic fields through different chemicals to actually concentrate the RNA, the mRNA into people's cells," Ruby claims in the video, which has also been shared thousands of times on Facebook, according to the social media monitoring tool CrowdTangle.

"We just know what and how is behind these magnetic phenomena where people are having these items sticking to them," she says.

Ruby -- who is a self-described "health economist and New Right political pundit" -- is referring to social media videos in which people claim that the Covid-19 vaccine made them magnetic, and attempt to prove it by sticking items to various parts of their bodies.

Ruby says: "Where they're putting this magnetic field technology is in and around the lipid nanoparticle envelope… to get this mRNA into your cells" in a process called "magnetofection."

Messenger RNA molecules in Pfizer-BioNTech and Moderna vaccines -- the first to be authorized and distributed globally that use the cutting-edge messenger ribonucleic acid technology -- are fragile and manufacturers use lipid nanoparticles to protect them while they are being delivered into cells. This video explains how the shots work.

Magnetofection is a method of transfection, or the process of artificially introducing nucleic acids (DNA or RNA) into cells, utilizing means other than viral infection. But it is not employed in the Covid-19 vaccines.

Dasantila Golemi-Kotra, associate professor at York University, explained on July 7 that "magnetofection requires the use of a magnet to force a molecule (on its own or bound to nanoparticles) with magnetic properties to enter a cell; the molecule enters the cell as a result of being drawn to the magnet positioned next to the cells."

"Nanoparticles with magnetic properties are not used in the mRNA vaccines. And no magnet is used during the injection to get the RNA vaccine in our cells," she added. Instead, "mRNA vaccines employ the use of lipids to carry the mRNA inside the cells."

Omar Khan, assistant professor at the University of Toronto, agreed. He said on July 7, that the claims made in the video about supramagnetic iron oxide nanoparticles and the use of magnetic fields to achieve magnetofection do not apply to Covid-19 vaccines.

"None of these components are used with the Moderna and BioNTech mRNA vaccines. There are no supramagnetic iron oxides in the mRNA vaccines, no magnetic fields applied to patients and thus no magnetofection."

He added that "there are thousands of different nanoparticles technologies being studied across the world. These technologies are not interchangeable."

According to fact sheets provided by health authorities in the US and Canada, none of the available Covid-19 vaccinations (Pfizer, Moderna, Johnson & Johnson or AstraZeneca) do not list any metal-based ingredients that would be necessary for magnetofection.

The US Centers for Disease Control and Prevention has also debunked the idea that the shots contain magnetic substances, saying: "Covid-19 vaccines do not contain ingredients that can produce an electromagnetic field at the site of your injection."

"All Covid-19 vaccines are free from metals such as iron, nickel, cobalt, lithium, and rare earth alloys, as well as any manufactured products such as microelectronics, electrodes, carbon nanotubes, and nanowire semiconductors," the federal health agency said.

"In addition, the typical dose for a Covid-19 vaccine is less than a milliliter, which is not enough to allow magnets to be attracted to your vaccination site even if the vaccine was filled with a magnetic metal," it added.

Asked about the claim that vaccines contained magnetic components for a previous fact-check, Dr Thomas Hope, vaccine researcher and professor of cell and developmental biology at Northwestern University Feinberg School of Medicine said it is "impossible."

"There's nothing there that a magnet can interact with, it's protein and lipids, salts, water and chemicals that maintain the pH. That's basically it, so this is not possible," said Hope.

At the 4:29 minute mark of the video, Ruby shows a screenshot of a website belonging to German company Chemicell and then cites a disclaimer on the site that says: "The Magnetofection reagents and all of its components are developed, designed, intended and sold for research use only. They are not to be used for human diagnostic or any drug intended." 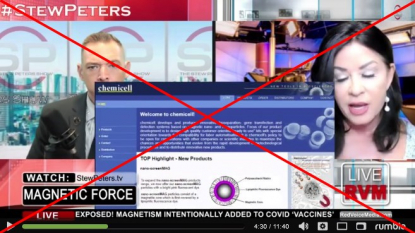 Screenshot taken on July 7, 2021 show a video on BitChute

Contacted by AFP on June 27, Chemicell said it had "no idea" why its website was cited.

It confirmed that it manufactures "magnetic particles for research-use applications (laboratory use)," but said its work is unrelated to the mRNA Covid-19 vaccines.

It added that its website had been "abused" in the video to make "unfounded" claims and to fuel "irrational fears."