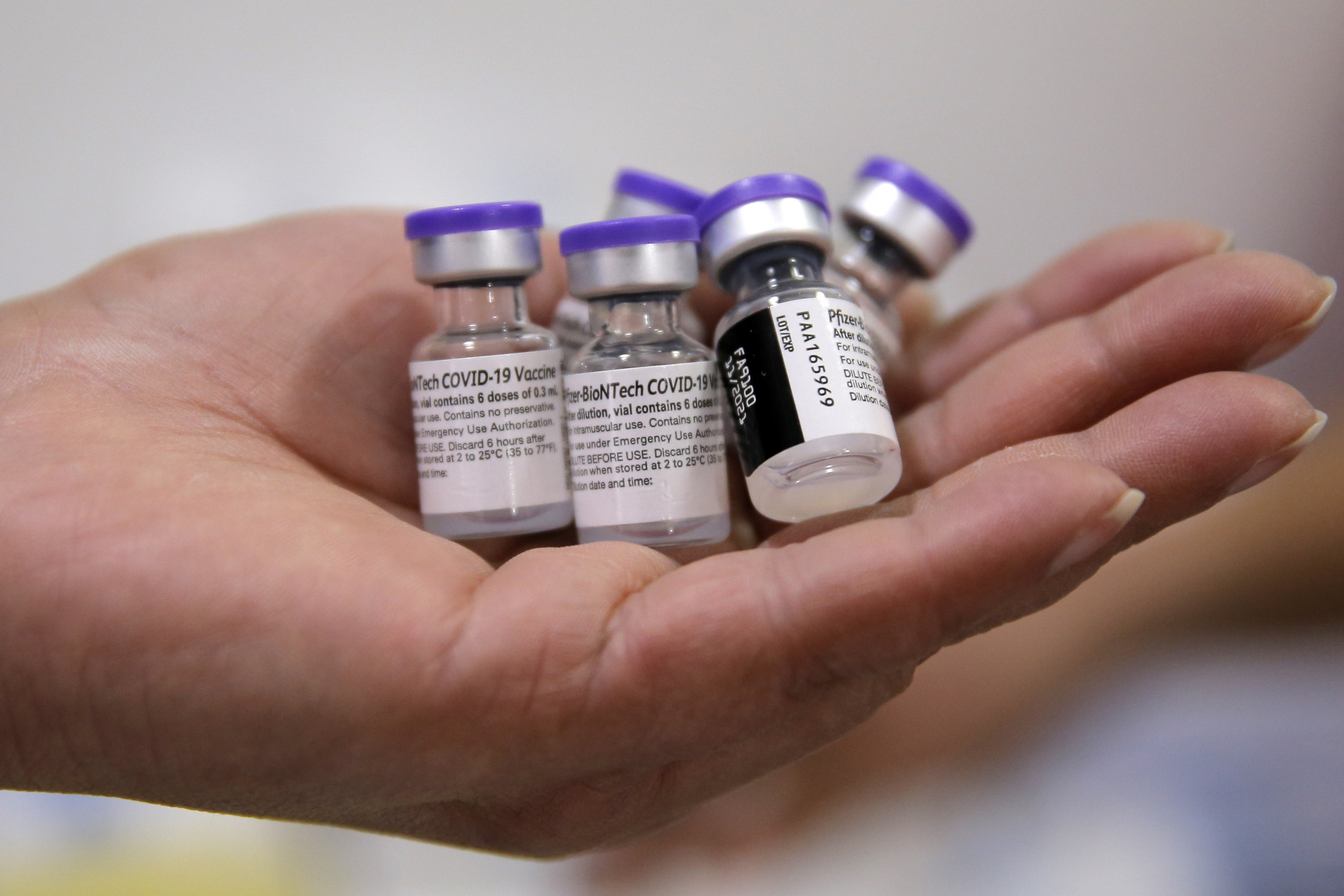 Vials of the Pfizer-BioNTech vaccine against Covid-19 are pictured on July 12, 2021 ( AFP / Javier Torres)

A video featuring a US pundit who claims the Pfizer-BioNTech Covid-19 vaccine is dangerous because it contains the nanoparticle graphene oxide has been watched more than a million times on social media. But the claims are based on a study whose methodology experts have questioned, Pfizer said the substance is not used in the manufacturing of its shot, and researchers told AFP there is no evidence graphene oxide is used in any vaccines currently on the market.

Peters discusses the Pfizer-BioNTech vaccine with Jane Ruby -- a self-described "health economist and New Right political pundit" whom AFP has fact-checked before. 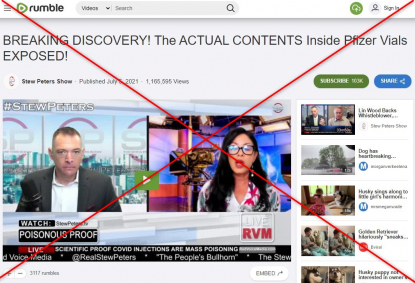 Screenshot taken on July 22, 2021 of a video from the Stew Peters Show shared on Rumble

Ruby claims that she read an English translation of the Spanish research that shows the Pfizer-BioNTech mRNA vaccine is dangerous because it contains graphene oxide.

Graphene oxide is a derivative of graphene, which has been reported to have antibacterial and antiviral properties. Graphene is super strong, ultra thin and has potential applications in a range of industries.

"It's virtually 99.99 percent graphene oxide," Ruby says of the shot, while also claiming the substance is a "poison" and that it "destroys literally everything in the cell."

It is part of a torrent of inaccurate claims about vaccines that have proliferated across the internet as countries around the world seek to immunize their populations against Covid-19.

The same claim was amplified by GlobalResearch.ca, a Canadian website that the US State Department has described as "deeply enmeshed in Russia's broader disinformation and propaganda ecosystem."

But the ingredients of all the Covid-19 vaccines authorized for use in the US and Canada (Pfizer-BioNTech, Moderna, Johnson & Johnson and AstraZeneca) are publicly listed and do not include graphene oxide.

Pfizer spokeswomanDervila Keane confirmed to AFP on July 8, 2021 that "graphene oxide is not used in the manufacture of the Pfizer-BioNTech Covid-19 vaccine."

In the video, Ruby is referencing a Spanish study published by Dr Pablo Campra at the end of June. The study was not published in a scientific journal, and has not been subjected to peer review.

In it, Campra says that Ricardo Delgado requested the study. Delgado is the founder of La Quinta Columna (Fifth Column), a group that has spread misleading information about masks and PCR tests. Their claims about graphene in Covid-19 shots -- including that it generates electromagnetic properties in humans -- were debunked by AFP Factual in early June.

To conduct the study, Campra examined a single sample of the Pfizer-BioNTech vaccine using optical microscopy and transmission electron microscopy (TEM). He then compared the images with those in other scientific literature.

He said he found "solid evidence of the probable presence of graphene derivatives".

Ester Vazquez, an expert in graphene health and safety who works with the European Commission's Graphene Flagship research group, told AFP on July 13 that she had read the study and found it "rather inconclusive."

She said that microscopy is not an adequate method to study the presence of graphene or graphene oxide.

"The tests carried out are insufficient to characterize graphene. It only shows some microscopy images that resemble pictures of graphene and graphene oxide in the literature. However, this is far from scientific proof -- graphene identification would require further analysis using other techniques," Vazquez said.

Contacted by AFP about the study, Campra said on July 14: "Our finding is that 99 percent of UV absorbance does not come from RNA, and its signal is compatible with graphene. But, many other substances show the same signal. We found microscopic evidence of graphene sheets, but further spectroscopic evidence is needed to confirm this structure."

Campra, who teaches at the University of Almeria, said that the results and conclusions of his report "do not imply any institutional position" of the school.

The university issued a statement on July 2 on Twitter distancing itself from the study -- which it called "unofficial" -- saying it used methodology that lacked transparency.

The methodology of the study was also questioned in a fact check by Health Feedback, a network of scientists, which concluded that Campra did not adhere to "traceability" protocols. This leaves the origin of his sample unclear, and makes it impossible to know if it was contaminated during the investigation process.

Professor Hong Byung-hee, an expert in nanomaterials at Seoul National University, told AFP for another fact-check on July 19 that "graphene is being tested for biomedical purposes, including for vaccines, but these applications are still in an experimental phase and a long wait is expected before they become commercially available following clinical trials."

Graphene oxide is being studied in vaccines as a possible adjuvant, or ingredient to help the shot trigger stronger immune response.

It was recently used as an adjuvant in the investigation of an intranasal vaccine against influenza, developed by the Institute for Biomedical Sciences at Georgia State University, in the United States. This vaccine has only been tested in mice and cell culture.

Dr Park Jong-bo, a researcher at Biographene, a company that develops graphene-based medicine, also confirmed on July 20 that "no vaccines on the market (are) based on graphene oxide."

Vaccines currently in use are "comprised of phospholipid layers, peptides or nucleic acids, and graphene oxide is not part of these categories," Park said.

AFP Fact Check has debunked a series of inaccurate claims about vaccines, available in English here.