Skip to main content
A demonstrator with a sticker that says "No to sanitary pass" takes part in a march to protest against the mandatory Covid-19 health pass in Paris on September 4, 2021 ( AFP / Stefano Rellandini)

Instagram posts about opposition to "mandatory vaccination" feature a photo of a large crowd in front of the Arc de Triomphe in Paris. But the photo predates the Covid-19 pandemic, and was taken during anti-government protests in France in 2018.

"Protests in France against mandatory injections have been ongoing for months," says text accompanying the photo in an October 2, 2021 Instagram post. 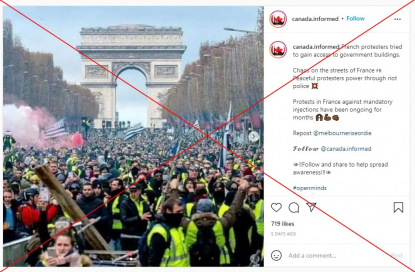 The same photo can also be found in October Instagram posts here and here with the same text, while a similar claim accompanies the image in a post on Facebook from July.

France has made a "health pass" a part of daily life in the country, requiring people to show proof of full vaccination, a negative test, or recent recovery from infection to visit a cafe, board a plane or travel on an inter-city train.

The pass has been met with protests. AFP reported that 14,500 people turned out in Paris on August 28. But the image shared on Instagram shows a different protest.

A reverse image search using Google shows that the picture can be found on this website with a credit to Olivier Coret of Divergence Media. 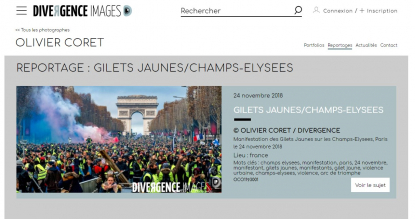 Screenshot taken on October 8, 2021 of the Divergent Media website

The caption says in French that the picture was taken on the Champs-Elysees on November 28, 2018 during one of the "gilets jaunes," or "yellow vest" protests. The protest movement sprang up in the fall of that year in opposition to increases in fuel taxes announced as part of the French government's efforts to pay for clean energy initiatives.

This picture is the latest example of images AFP has found used out of context in posts lauding protests against health measures put in place to try and curb the spread of Covid-19. AFP also found the same photo was misrepresented in August 2021.