"The Entire Nation of France Has Come Together To Fight Against The Passports," reads the tweet published on August 22, 2021. 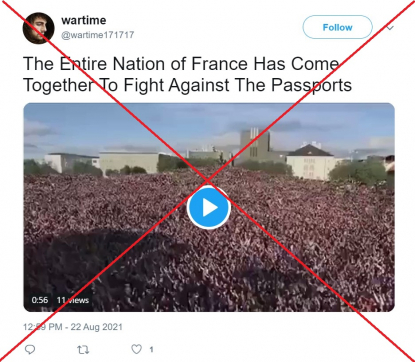 The claim was published amid protests in France against the government's introduction of a new health pass system.

It requires people to present proof of vaccination or a negative test to enter a restaurant, theatre, cinema, long-distance train, or a large shopping centre.

Other instances of the claim appear on Twitter here, as well as on Facebook here and here.

The video appears to have originated from this entry on video-sharing site Rumble.

The video actually shows a gathering of football fans in Iceland in 2016.

They were welcoming home the country's national football team following the Euro 2016 tournament in France.

The video was originally published by Icelandic telecommunications company and TV channel Síminn on July 4, 2016.

The video, which has since been deleted, can be viewed in a tweet by sports news site BenchWarmers below:

Below is a comparison of the video in the misleading post (L) and the BenchWarmers video (R):

The fans gathered at Arnarhóll, a hill in Iceland's capital.

Below is a Google Street View image of the hill, showing the buildings which appear in the video: