An image shows 2018 French protests against a tax on fuel, not Covid-19 restrictions

Three photos have been shared hundreds of times on Facebook in South Africa and Australia alongside a claim that they show Covid-19 related demonstrations in France and Greece. But the claim is misleading; while two of the images show Greeks protesting against their country’s Covid-19 vaccination programme, a third image, purportedly of a France anti-vaccination protest, was taken in 2018 during the “gilets jaunes” protests in France, before the pandemic. The pictures were also posted here on Facebook, with a caption that reads: “Greece and France... Yep its happening, time to unlesh the new TRUTH variant (sic).”

Two of the images indeed show people protesting against Covid-19 measures in Greece. However, the third image, from France, was taken before the pandemic began.

A reverse image search revealed that the main photo was taken in 2018 during what became known as the “gilets jaunes”, or ‘yellow vest’ protests, in France. The picture is credited to Olivier Coret of Divergence Images. 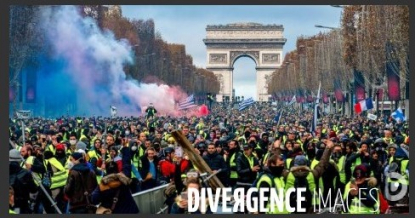 Screenshot of the original photo by Divergence Images, taken on August 17, 2021

The ”gilets jaunes” movement sprang up in the fall of 2018 in opposition to increases in fuel taxes announced as part of the French government’s efforts to pay for clean energy initiatives.

The second and the third images show anti-vaccine protesters in Athens on July 14, 2021, when thousands of people took to the streets in opposition to Covid-19 vaccination regulations in Greece. A screenshot of the first photo showing the Greece demos, taken on August 18, 2021 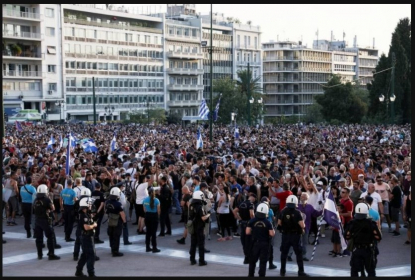 A screenshot of the second photo showing the Greece demos, taken on August 18, 2021

The second post, while stopping short of claiming outright that the images depict demonstrations against Covid-19 laws, invokes the issue of viral variants.

Since the outbreak of Covid-19, SARS-CoV-2, the virus that causes the disease, has mutated several times. According to the Centers for Disease Control and Prevention (CDC), the delta variant is regarded as the most contagious form of the virus so far.

All viruses, including SARS-CoV-2, change over time, potentially affecting how they spread, how vaccines perform against them, and how severe they may become.