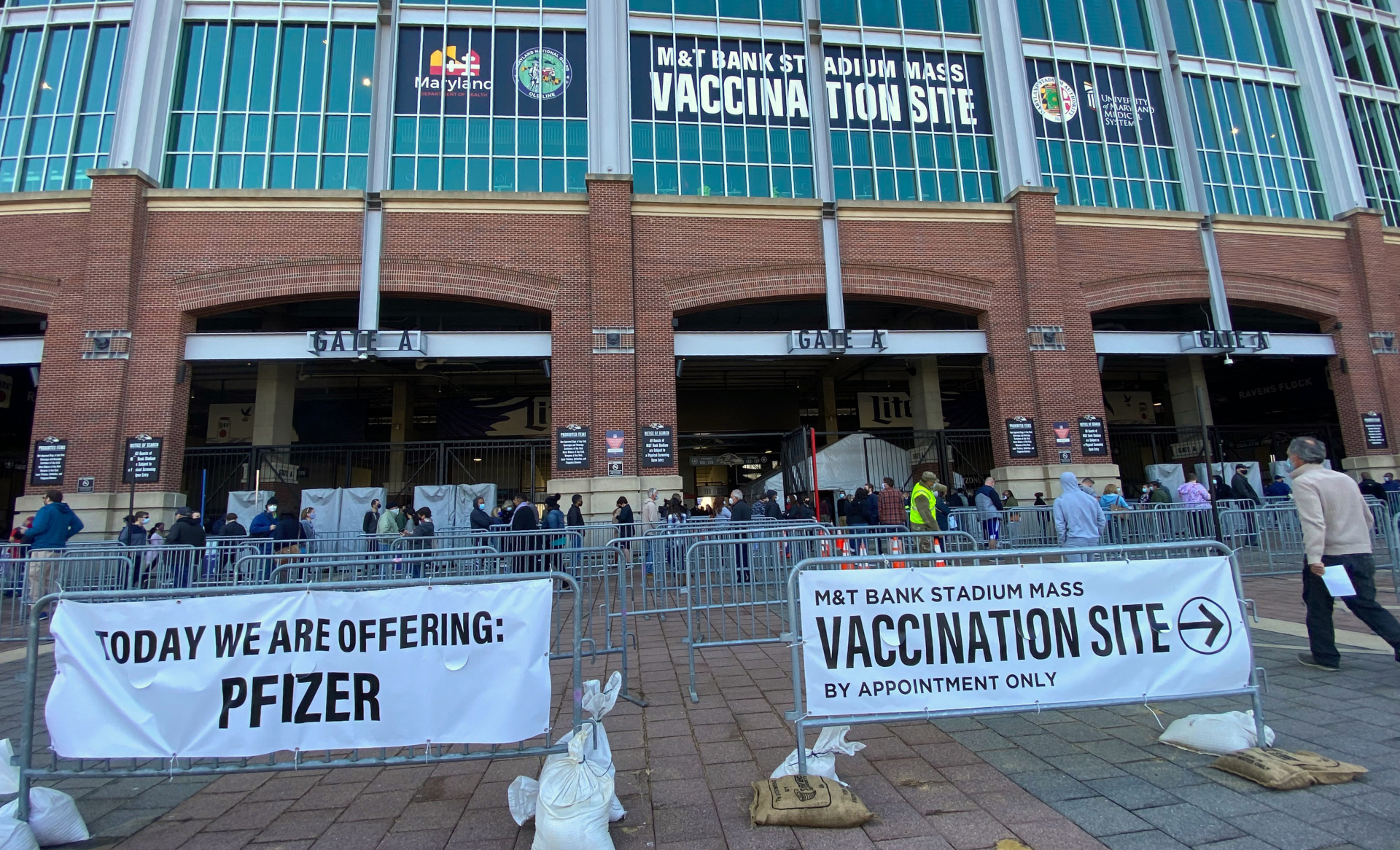 People line up at M&T Bank Stadium in Baltimore, Maryland, which was transformed in a Covid-19 mass vaccination site. (AFP / Eric Baradat)

A scientist’s open letter to the World Health Organization claims that the large-scale Covid-19 vaccination drives currently underway around the world should cease before they produce the catastrophic appearance of more deadly variants of the coronavirus and increased risk for younger people. But medical experts say the claims are false and that vaccination is urgently needed to control virus mutation through widespread immunity.

The letter’s author, self-described “independent virologist and vaccine expert” Geert Vanden Bossche, shared it on his Twitter account on March 6, 2021. 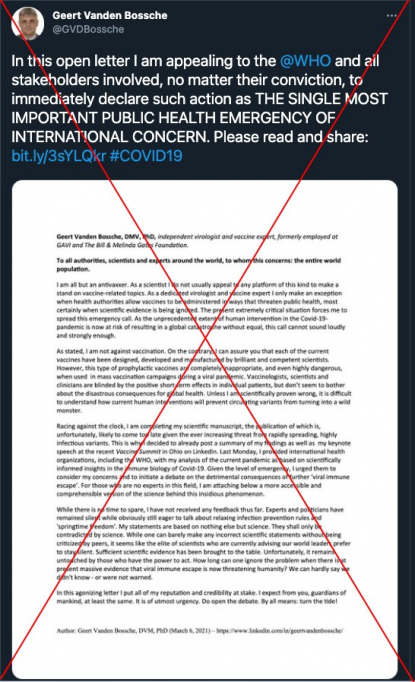 Claims from the letter, and a subsequent interview by Vanden Bossche, have been shared tens of thousands of times on Facebook and Instagram in the United States, Canada, Austria, Romania, Belgium, Ireland, Germany, Italy, France, the Czech Republic and others.

Vanden Bossche, who is trained in veterinary medicine, claims that “widespread and stringent infection prevention measures combined with mass vaccination campaigns using inadequate vaccines will undoubtedly lead to a situation where the pandemic is getting increasingly ‘out of control’” in a process called “viral immune escape.”

He says that infection prevention measures such as lockdowns have suppressed innate immunity in young people and that Covid-19 antibodies, which can be generated naturally or by vaccines, are “limited” and “short-lived.”

Mass vaccination during the pandemic, he says, will lead to “monster” variants when the virus spreads from older people to those who are younger, as countries begin loosening restrictions.

Some of his claims have also been spread by prominent anti-vaccine advocates Del Bigtree, Robert F. Kennedy Jr, and his non-profit organization Children’s Health Defence.

AFP Fact Check has previously reported on misinformation spread by Bigtree and Kennedy. Facebook, Instagram and YouTube have removed some accounts linked to Kennedy and Bigtree for spreading inaccurate information.

Several Covid-19 vaccines are being administered or are in trials around the world.

Some 148 million total doses have been administered in the United States, while nearly 13 percent of Canadians have received at least one dose of a Covid-19 vaccine.

Below, AFP Fact Check examines some of Vanden Bossche’s false and misleading claims.

Vanden Bossche claims that large-scale vaccinations of elderly populations will force the virus to “continue causing disease in younger age groups,” where it could undergo “targeted mutations” in the spike protein that would “enhance its infectiousness.”

Gary McLean, a professor of molecular immunology at London Metropolitan University, told AFP that rather than creating a “monster” as Vanden Bossche suggests, mutations in the spike protein may hinder the spread of the virus.

“Mutations are relatively subtle in spike and cannot go so far as suggested otherwise they will no longer resemble spike,” he said, adding “the virus will lose its way of infecting cells if spike continues to mutate and the virus will die out.”

Additionally, variants of the virus emerged prior to the widespread availability of vaccines.

Of the current known variants, three are particularly worrying because of their increased transmissibility and/or virulence are those initially detected in southeast England, South Africa and in travelers from Brazil arriving in Japan.

This video explains how a virus mutates:

Experts say it is crucial to vaccinate as many people as quickly as possible in order to limit the risk of new variants emerging.

“We are not forcing the virus into younger people by vaccinating the elderly,” John Wherry, director of the Perelman School of Medicine’s Institute for Immunology at the University of Pennsylvania said, adding that data from Israel does not support Vanden Bossche’s claim.

An Israel Health Ministry study of more than a million people -- more than 35 percent of whom were under 39 -- found high levels of vaccine effectiveness. There was no evidence that high vaccination rates in the elderly led to new variants, as predicted by Vanden Bossche.

Joe Grove, a virologist at the Institute of Immunity and Transplantation at University College London, explained that even though vaccination could drive some virus changes, “it is not credible that widespread immunity will drive the emergence of a monster virus.”

“If we’re worried about the Covid-19 becoming some ‘super-virus,’ the best way to stop that is to stop it from replicating and the best way to do that is vaccines,” he added.

This was also confirmed by Scott Halperin, director of the Canadian Centre for Vaccinology.

“If we rapidly achieve high levels of population immunity through vaccination, the risk of variant emergence is decreased because there are insufficient numbers of susceptible individuals to continue the propagation of the virus and spread through the community,” he said.

“There can be no doubt that lack of exposure due to stringent containment measures implemented as of the beginning of the pandemic has not been beneficial to keeping people’s innate immune system well trained,” says Vanden Bossche.

“There is no evidence of this whatsoever. If this were true, we’d see a major rise in infections due to environment and commensal bacteria and other germs because our innate immune system is weakened. This has absolutely not happened,” he said.

This was confirmed by Grove.

“That is completely incorrect. The idea that lockdowns and the associated reduction in exposure to everyday bugs will have meant that the innate immune system has lost its fitness, is a fundamental misunderstanding of how the immune system works,” he said.

Vanden Bossche goes further, suggesting that “it’s important, indeed, to keep it sufficiently exposed to environmental challenges,” implying that our innate immunity is only “well trained” if it is regularly exposed to bugs or viruses.

Wherry described this as “not only incorrect and a misunderstanding of how immunology works, but flat out dangerous advice.”

Vanden Bossche claims that the increase in “S (spike) specific” antibodies, which can be  generated by Covid-19 infection or vaccines, is “rather limited and only short-lived.” He does not indicate what he means by short-lived.

“This is incorrect,” said Wherry. “Initial studies claiming that antibodies waned rapidly have not held up over time; antibodies look pretty durable, at least over the one to three-year time frame.”

Beyond that span, Grove said, the body is still capable of fighting off the virus.

“Antibodies will circulate in your blood for months and years after vaccination/infection, but may stop being produced eventually. However, your antibody factories (b-cells) remember how to make them and are on standby for the next time you encounter the virus. Therefore, even if you are reinfected your immune system will kick in to fight it off, maybe even before you have symptoms.”

Danny Altmann, professor of immunology at Imperial College London, was also optimistic about the vaccines in use. He said that “the current vaccines are among the most immunogenic I’ve ever witnessed, logs above the level induced by natural infection.”

Early data for the Moderna vaccine showed that both maintained antibody levels for at least three months.

A recent CDC study showed that the Moderna and Pfizer mRNA vaccines reduced the risk of infection “by 90 percent two or more weeks after vaccination.”

On his LinkedIn profile, Vanden Bossche lists previous roles at a number of recognised health organizations, including at the German Centre for Infection Research (DZIF) from August 2017 to December 2017 .

DZIF, the Gates Foundation, Global Alliance for Vaccines and Immunization (GAVI) and Solvay all confirmed to AFP that they had at one point employed Vanden Bossche. Novartis and GSK declined to comment.

The University of Ghent also confirmed to AFP that Vanden Bossche received an MD in Veterinary Medicine there in 1983.

An in-depth review of Vanden Bossche’s claims by Jonathan Jarry, a biological scientist at McGill University, found that “his academic publications essentially stop in 1995.”

The CDC, Health Canada and the World Health Organization all recommend the use of vaccines against Covid-19.

“Safe and effective vaccines against Covid-19 prevent individuals from contracting a serious disease which could otherwise lead to hospitalisation or death. This is particularly important for health care workers and vulnerable populations like older people and those suffering from chronic illnesses,” a spokesperson for the European Medicines Agency told AFP Factuel.