Footage shows cemetery swept away by floods in Tajikistan

A video of a muddy graveyard has been shared thousands of times on Facebook alongside the claim that it shows exposed and empty burial plots in a Thailand cemetery. This, according to the claim, is evidence of what Christians refer to as the rapture, a future biblical event that will signal the second coming of Jesus Christ. The claim is false; the clip was filmed in Tajikistan two years ago after floods destroyed a village cemetery and washed away the graves.

“God have mercy, could this be rapture ohh?” reads a Facebook post shared more than 26,000 times since it was published in July 2019. It continues to be shared two years later.

“Scary: Cemetery in Thailand dawned like this today, with all the graves open and without any corpse and so far no one can explain what he hears, mystery remains on the site. JESUS is coming soon,” reads the rest of the caption.

The same claim was shared here and here on Facebook.

However, there is no truth to the claim that the footage offers evidence of the rapture, nor was the video filmed in Thailand.

A reverse image search of multiple keyframes from the video revealed that the scene was filmed in a cemetery in the Tajikistan village of Shurkurgan, near the city of Konibodom in Sughd province.

This brief online report from June 3, 2019, attributed to Radio Free Europe/Radio Liberty (RFERL) describes how the graves collapsed after a river on the outskirts of the village overflowed its banks the day before and flooded the area. 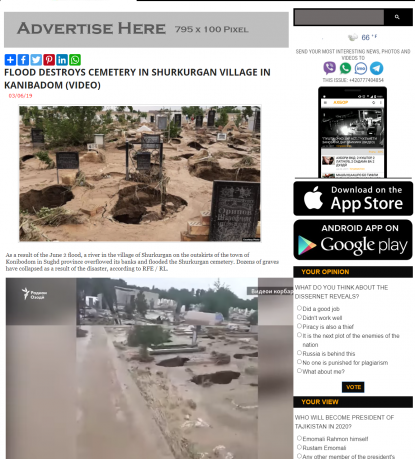 A screenshot of the news report about the floods, taken on March 24, 2021

The report included a photograph of the aftermath and a 10-second clip of the destruction, which was posted to YouTube by Ozodivideo, the Tajik service of RFERL. The caption reads: “The mudflow destroyed the Shurkurgan cemetery in Konibodom.”

Although not identical to the video posted on Facebook claiming to show a Thai cemetery, the short clip clearly comes from the same location. A longer version of it can be viewed here, along with detailed reporting of the rainfall that devastated parts of Tajikistan two years ago. A screenshot taken on March 25, 2021, from a video filmed inside the devastated cemetery in Konibodom, Tajikistan, showing the base of a black mast that appears in other footage

AFP Fact Check found yet another video using the Yandex search engine. The translated caption on this video is titled “SH.Konibodom after the flood” and shows the aftermath of the destruction, seemingly filmed through the perimeter wall. 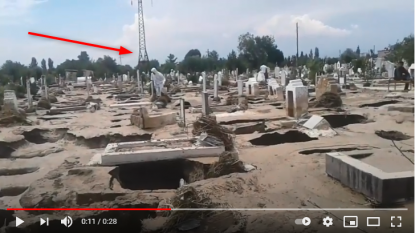 A screenshot taken on March 25, 2021, from a video found using Yandex, showing the Konibodom cemetery two days after it was flooded, with a tall black mast seen in similar videos

A tall black mast is visible in this footage, matching part of a previous video where the base of this structure can be seen.