A photo has been shared hundreds of times in multiple Facebook posts alongside a claim that it shows a Russian cargo flight landing in Myanmar to transport “sophisticated weapons” in March 2021. However, the claim is false. The photo in fact has circulated in reports about a Russian plane landing at Chennai airport in India in September 2018.

The photo was published on Facebook here on March 22, 2021. The post has since been shared more than 950 times. 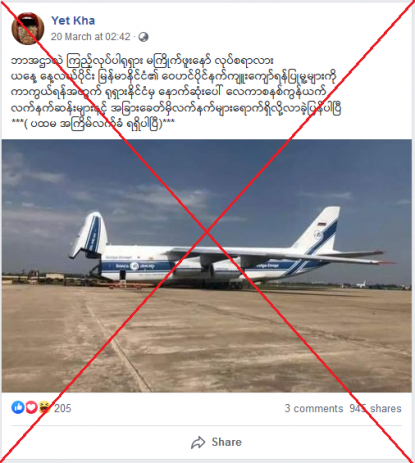 The Burmese-language post translates in English as: “To prevent intrusion into Myanmar’s airspace, the latest air defense system and other modern weapons from Russia arrived this morning. Received for the first time.”

The photo has been shared more than 700 times after it appeared with a similar claim here, here, and here.

A reverse image search on Bing found the photo was published in this report by The Times of India, an Indian newspaper, on September 10, 2018, about a Russian cargo plane that landed at Chennai airport.

Below is a screenshot of the Times of India article: 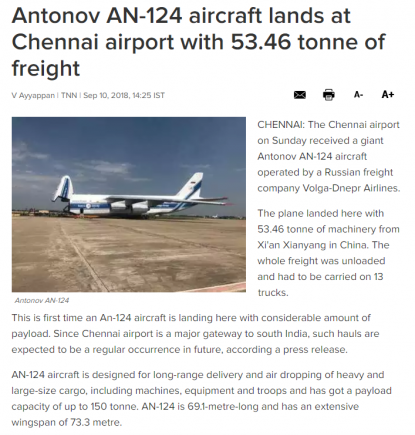 Screenshot of the The Times of India’s article, taken on March 25, 2021

The title of the report reads: “Antonov AN-124 aircraft lands at Chennai airport with 52.46 tonne of freight.”

The first two paragraphs of the report read: “The Chennai airport on Sunday received a giant Antonov AN-124 aircraft operated by a Russian freight company Volga-Dnepr Airlines.

“The plane landed here with 53.46 tonne of machinery from Xi'an Xianyang in China.”

The arrival of the Russian cargo plane in Chennai airport was also reported by the Hindu Business Line here.

Below is a screenshot comparison of the photo of the misleading post (L) and the Times of India photo (R):

As of March 25, 2021, multiple keyword searches online have found no credible reports about the alleged arrival of a Russian military cargo in Myanmar.