Skip to main content
A health worker prepares a dose of the AstraZeneca/Oxford vaccine at a coronavirus vaccination centre at the Wanda Metropolitano stadium in Madrid on March 24, 2021. - Spain raised the maximum age limit for people to receive the AstraZeneca vaccine, which has faced setbacks in Europe due to safety concerns, from 55 to 65. (Photo by GABRIEL BOUYS / AFP) (AFP / Gabriel Bouys)

Facebook posts shared hundreds of times claim AstraZeneca, the name of a British-Swedish drugmaker, means "weapon that kills" in a combination of three languages. The posts circulated online after millions of Oxford/AstraZeneca Covid-19 vaccines were administered to people around the world. The claim is misleading: the name "AstraZeneca" was created from the names of two other companies. "Astra" derives from the Greek word "astron", meaning "star", while "Zeneca" refers to "Zeneca Group", a British company whose name was invented by a branding agency.

The image features a screenshot from a Wikipedia page entitled “Astra (weapon)”. It also shows a screenshot of a Google Translate window, suggesting that “Astra Ze Neca” means “weapon that kills” in a combination of Sanskrit, Polish and Latin.

“Wake up, fools!” reads the red text on the image. 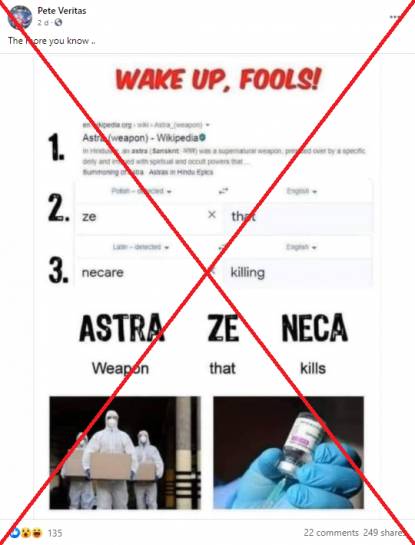 The Facebook post's caption reads: "The more you know..."

The post circulated online after leading EU countries, including France, said they would resume Oxford/AstraZeneca vaccinations after a brief suspension to assess the vaccine's safety.

On March 18, 2021, the European Medicines Agency (EMA) said the jab is "safe and effective" and not associated with a higher blood clot risk after days of commotion around the shot. The WHO and Britain's health watchdog have also said the vaccine is safe. AFP reported on the developments here.

Before the coronavirus pandemic, AstraZeneca explained the origins of its name in a series of tweets on October 17, 2019.

"Astra" derives from the Greek word “astron”, meaning “star”. "Zeneca" is the name of a former British pharmaceutical company and does not have another meaning in any language, according to AstraZeneca's tweet.

"Zeneca" is an invented name, created by an agency instructed to find a name which began with a letter from either the top or bottom of the alphabet and was phonetically memorable, of no more than three syllables and did not have an offensive meaning in any language.

In 1999, Astra AB and Zeneca Group merged to form AstraZeneca in one of the largest ever European mergers, as noted in reports at the time by BBC and CNN.

The former chief executive of Zeneca, David Barnes, told British newspaper The Daily Telegraph in January 2001 that he instructed branding agency Interbrand to find a name.

"There is an advantage in being alphabetically at the top or bottom of lists, A or Z," Barnes told The Daily Telegraph. "I asked Interbrand to find a name that was phonetically memorable, of no more than three syllables and didn't mean anything stupid, funny or rude in other languages. A new name also allowed us to instill a new company culture".