A Facebook post written by the former chairman of Papua New Guinea’s Institute of Medical Research claims vaccines being rolled out for health workers in the country have bypassed the appropriate regulatory authorities and are being rolled out “for monetary gains”. The claims are misleading: experts told AFP that the vaccine has passed necessary regulation and is provided free of charge, while institutions linked to the professor have distanced themselves from his remarks and endorsed the vaccine roll-out. 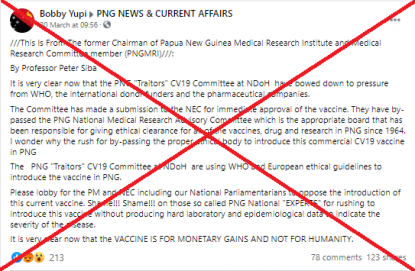 The Facebook post claims medical regulators in Papua New Guinea have “bowed down to pressure” from the World Health Organization, pharmaceutical companies and international donors.

The post asks why medical authorities have “by-passed the PNG National Medical Research Advisory Committee” in order to roll-out “this commercial CV19 vaccine”.

“The committee has made a submission to the NEC (National Executive Council, editor's note) for immediate approval of the vaccine. They have bypassed the PNG national Medical Research Advisory Committee, which is the appropriate board that has been responsible for giving ethical clearance for all of the vaccines.”

“It is very clear now that the VACCINE IS FOR MONETARY GAINS AND NOT FOR HUMANITY,” it claims.

The message purports to be from Professor Peter Siba, the “Former Chairman of Papua New guinea Medical Research Institute (PMGMRI)”.

Siba said in this Facebook post on March 22, 2021 that he would “not apologize or retract any of my posts related to the CV19 pandemic and the vaccine in PNG”.

Papua New Guinea's Justice Minister Bryan Kramer said in a Facebook post he spoke to Siba and confirmed that the comments had been made by him.

A recent surge in Covid-19 cases has overwhelmed the southwestern Pacific nation's understaffed and under resourced health sector, with the country detecting hundreds of new cases each day.

The Australian government has delivered 8,000 vaccines to the country and lobbied vaccine maker AstraZeneca to supply one million more doses, AFP reported here.

The Facebook post casting doubt on the vaccine process in Papua New Guinea has been shared by other users based in the country which neighbours Australia, see here, here, here and here.

Professor Glen Mola from the University of Papua New Guinea (UPNG) told AFP in an interview the Covid vaccines being donated by Australia have been through the appropriate regulatory processes.

In response to the claims in the Facebook post that the vaccine has bypassed the country’s “Medical Research Advisory Committee”, he said the rollout of the vaccine “is not a research issue”.

“It does not have to go to our medical research advisory committee in any way, because we’re not doing research on this vaccine, all the research has been completed in Europe and America,” Mola said.

A recent US study found the AstraZeneca vaccine to be 76 per cent effective at combating Covid-19, the disease caused by the Sars-CoV-2 virus.

The body assessing the safety of vaccines in Australia, The Therapeutic Goods Administration, also gave provisional authorisation to AstraZeneca’s vaccine in February 2021.

According to this factsheet from New South Wales Health, the vaccine “has been shown to be safe in large clinical studies of tens of thousands of people”.

The Divine World University (DWU), has distanced itself from Siba’s comments in a statement posted to Facebook here, adding that “DWU supports the decision of the Government approving the use of the vaccine”.

“Millions of people from many countries are now being vaccinated and we welcome the PNG Government's decision and the support of international organisations and development partners to access these vaccines for the people of Papua New Guinea,” the statement reads.

In a March 24 statement, the PNGIMR endorsed the rollout of the Covid-19 vaccine in the country, stating “vaccines are a crucial public health tool in the battle against Covid-19”.

“There is overwhelming evidence that the COVAX vaccine by Oxford/AstraZeneca has undergone rigorous testing in various clinical trials and in populations that have received the vaccine, adverse effects monitoring (pharmacovigilance) has been proved to meet international agreed benchmarks for safety and efficacy,” the statement reads.

The vaccine is not being rolled out for “MONETARY GAINS”

The PNG Minister for Health, Jelta Wong, told AFP in an interview the vaccines being rolled out to health workers in the country are free and the doses expected to be given to the public will be as well.

Professor Mola told AFP that the vaccine was not being rolled out for monetary gain in PNG.

“It's not got to do with monetary gain in PNG. Doctors aren’t getting any money for giving vaccines,” he said.

The Australian government has not made any money out of providing the vaccines to PNG either, with the Department of Foreign Affairs and Trade (DFAT) confirming to AFP they were provided for free.

“The Australian Government provided the vaccines and humanitarian supplies without charge, as part of our development support for Papua New Guinea,” a March 26 statement from DFAT reads.

This media release from the Australian Prime Minister’s Office details the supplies donated to PNG as part of the development program. It includes personal protection equipment, funding for ambulance services and hospital tent facilities.