These billboards were put up by a nonprofit Hindu organisation, not the Canadian government

Photos of billboards in Canada thanking India and Prime Minister Narendra Modi for sending Covid-19 vaccines to the country have been shared thousands of times in Facebook and Twitter posts which imply that the billboards were installed by the Canadian government. The posts, however, are misleading; the billboards were in fact put up by a Canadian nonprofit Hindu organisation.

A photo of one of the billboards was published on Facebook here on March 11, 2021.

The post’s Hindi caption translates to English as: “Canada became a fan of India’s Covid-19 vaccine. Hoardings put on in Toronto to thank Modi. #ThankYouPmModi”. 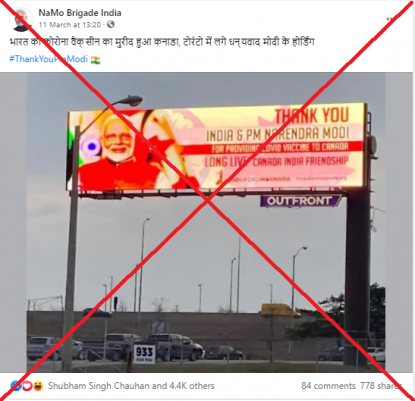 The post circulated just weeks after hundreds of thousands of Covid-19 vaccines manufactured in India were delivered to Canada, as The Times of India reported on March 4, 2021.

The billboards were actually put by Hindu Forum Canada, a Hindu activist and educational nonprofit organisation — not the Canadian government.

Below is a screenshot of the photo with Hindu Forum Canada’s branding highlighted in green: Screenshot of the photo with Hindu Forum Canada’s branding

The organisation published a video promoting their billboards, which were displayed across the Toronto metropolitan area, on Twitter here on March 11, 2021.

The Hindustan Times, a major Indian newspaper, published a report on the billboards here on March 11, 2021.

The report reads: “‘Our objective is to highlight the natural friendship between Canada and India and to highlight this positive development with India sending vaccines to Canada,’ said Rao Yendamuri, president of Hindu Forum Canada, the community group behind the billboard campaign.”

Hindu Forum Canada published the Hindustan Times article on its own website here.