This photo was taken at a rally in Bulgaria in 2013

An image of a tearful woman gazing into the eyes of a police officer in riot gear has been shared in multiple Facebook posts which claim the picture was taken in the Netherlands in March 2021 amid protests against coronavirus lockdown restrictions. The claim is false; the image shows an anti-corruption protest in Bulgaria in 2013. 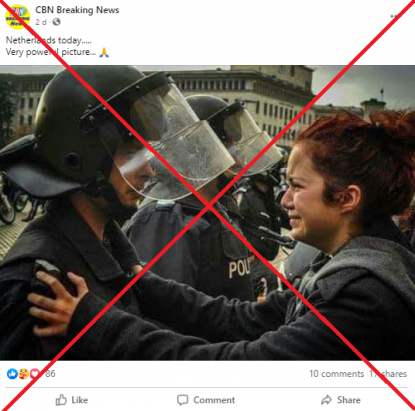 The photo was shared alongside the same claim on Facebook here, here and here.

The image was published following clashes between police and anti-coronavirus lockdown protesters in the Netherlands on March 21, 2020, AFP reported here.

A Google reverse image search found that the photo was published in a BuzzFeed News article on November 14, 2013, called “The Story Behind This Powerful Photo Of A Police Officer And A Student Protester”.

The article reports that the photo was posted on November 13, 2013 on image hosting site Imgur by a user called “plamentanev”.

The Imgur post is titled “This is what is happening in Bulgaria”. 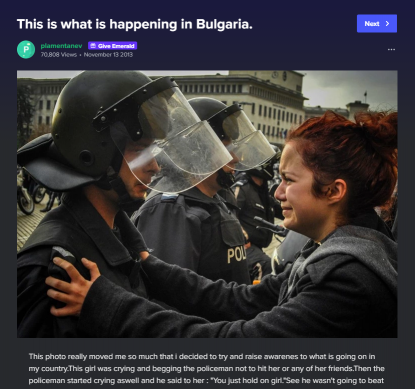 A screenshot of the Imgur entry.

“This photo really moved me so much that i decided to try and raise awarenes[s] to what is going on in my country,” the image’s description reads in part. “This girl was crying and begging the policeman not to hit her or any of her friends.Then the policeman started crying aswell and he said to her : 'You just hold on girl.'”

The picture’s photographer, Stefan Stefanov, was interviewed by AFP here on November 1, 2014, following the news that his photo would appear in the US sci-fi movie The Giver.

Stefanov also appeared with a printed copy of the picture in this AFP photo. 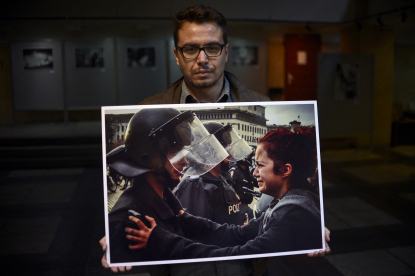 Bulgarian photographer Stefan Stefanov poses with his picture from an anti-government protest in the National Academy for theatre and film arts in Sofia on October 31, 2014. The photo became famous on social networks and was chosen for a new film in Hollywood, The Giver. This sci-fi film starring Meryl Streep, from the novel by Lois Lowry, has just come out in France cinemas. AFP PHOTO / NIKOLAY DOYCHINOV (Photo by NIKOLAY DOYCHINOV / AFP) (AFP / Nikolay Doychinov)

On March 25, 2021, Stefanov confirmed to AFP that he took the photo on November 12, 2013 during a protest against the government which took place in Sofia. The photo is taken in front of the main entrance of the National Art Gallery in Sofia.

An AFP journalist in Bulgaria confirmed that the building in the background of the photo is the Bulgarian National Bank, as viewed here on Google Street View.

Thousands of Bulgarians took to the streets in anti-corruption protests in November 2013, as AFP reported here at the time.

The misleading image was also circulated during protests in Venezuela in February 2014, as reported by CNN here. 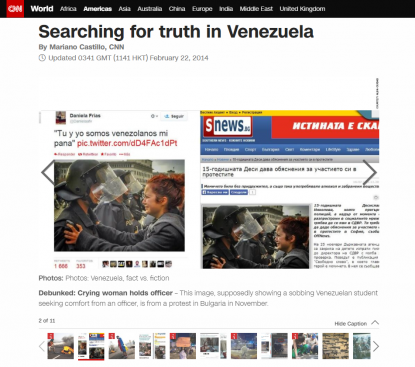