This photo shows Pope Francis' visit to Brazil in 2013

A photo has been shared repeatedly in Facebook posts alongside a claim it shows anti-lockdown protesters on a beach in Sydney, Australia's largest city. The claim is false: the AFP photo actually shows crowds gathered on a beach in Brazil during Pope Francis' visit in July 2013. There have been anti-lockdown protests in Australian cities but as of August 30, 2021, the crowds have been far smaller than the one shown in the photo.

The image was shared here on Facebook on August 19, 2021 alongside a claim it shows Sydney's Bondi Beach. 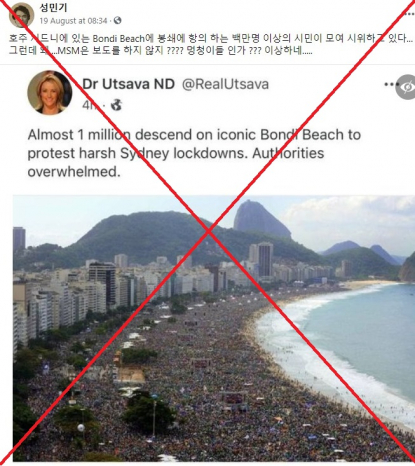 "Millions of people gathered at the Bondi Beach in Australia to protest against the country's lockdown measures. Why aren't the main media reporting it? Are they idiots? Strange," reads the post's Korean-language caption.

The same image was shared by Facebook users in several other countries -- including the UK, the US, Slovakia and Czech Republic -- alongside a similar claim.

A reverse image search on Google found the photo was published in this report by US daily The Los Angeles Times on July 20, 2013.

The photo -- taken by AFP photographer Tasso Marcelo -- was actually taken in July 2013 on Copacabana Beach in Rio de Janeiro, Brazil's second-biggest city, during a visit by Pope Francis.

Marcelo captured a crowd estimated to be as large as three million people during a mass celebrated by the pontiff. 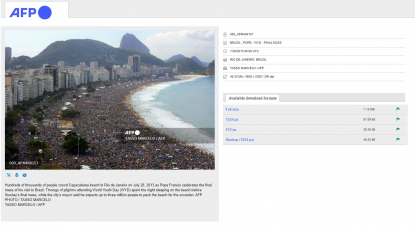 Below is a screenshot comparison of the image shared in the misleading Facebook posts (L) and the AFP photo (R):

Screenshot comparison between the image seen in the misleading Facebook post (L) and the photo taken by AFP (R). ( AFP)

To date, anti-lockdown protests in Australia have attracted no more than a few thousand people.

On August 21, 2021, protests were staged in several Australian cities following the announcement of tighter pandemic measures.

Hundreds of people were arrested after violent clashes between anti-lockdown protesters and police.

AFP traced the origin of the image and the claims from the Facebook post to the social network Gab.

Although the original post has since been deleted, AFP found Facebook posts in which the claim was shared via a link to Gab. 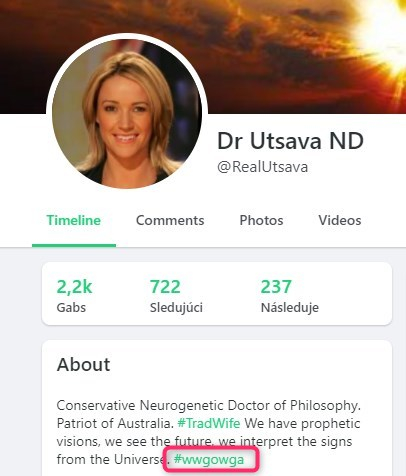 The "Dr Utsava ND" profile contains a reference to the QAnon conspiracy theory ("#wwgowga") in its description.