Image shows 3D artwork, not a new species of coral in the Galapagos

An image of what appears to be a striped form of sea life has been shared on Facebook thousands of times alongside a claim that it shows a new species of coral discovered near the Galapagos Islands. But the claim is false: the picture is actually a 3D fractal artwork created by a Spanish artist. 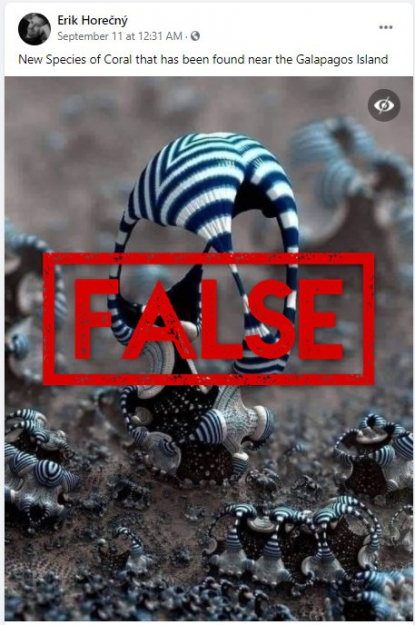 “New Species of Coral that has been found near the Galapagos Island (sic),” the caption of the post reads.

The Galapagos Islands are a UNESCO World Heritage situated in the Pacific Ocean. The islands are part of Ecuador.

But the claim that this image depicts a new species of coral in the waters near the Galapagos Islands is false.

By conducting a reverse image search, AFP Fact Check found that the photo has been online since at least 2017 and that it is a work of art, not a real coral.

The image was created by a Spanish digital artist, known as "batjorge". Titled "Ecosystem", the artwork first appeared on DeviantArt -- an art-sharing platform -- on August  27, 2017. The user "batjorge" has been active on the platform for nine years.

According to the user's "about" page, he is a Spanish digital artist who works in several media, including illustrations, photography, typography and 3D art.

Contacted by AFP Fact Check, the artist, who confirmed that his real name is Jorge Abalo, reiterated that the piece is digital art and does not show a new coral species.

“The image is an artwork and not a photo as some social media users say,” Abalo said.

He also posted a clarification on the DeviantArt website,  writing that the image is a “3D fractal digital work, done with Mandelbulb 3D software”.

Fractal art uses geometric patterns, known as fractals, that repeat indefinitely. Fractal patterns can also be found in nature, such as on snowflakes and with certain flower petals. In fractal art, the artist creates a pattern using a mathematical formula, which then determines the design of the object.

Mandelbulb 3D is a software created for fractal imaging, which translates nonlinear equations into fractal objects.

Tim Dobyns, a spokesman for the Galapagos Conservancy, also confirmed to AFP Fact Check that the image doesn’t show a real organism discovered near the islands.

“That is a digitally rendered image, not a new species of coral,” said Dobyns.