This is a picture of an artwork, not a real human-elephant hybrid

Multiple posts on Facebook have claimed that a picture of a baby with animalistic features proves that a hybrid human-elephant child was recently born to a woman in Norway. The claims are false; the picture shows an artwork created and exhibited more than a decade ago by an Australian artist.

A Facebook post published on June 12, 2021, and shared in South Africa includes a picture of an infant with an elongated nose similar to an elephant’s trunk. The “newborn” has no fingers or toes, but sports a head of ginger hair.

“Human-Animal hybrid experiments are taking place away from the media spot light. This Human-Elephant hybrid was recently born to a woman in Norway (sic),” reads the post’s caption. 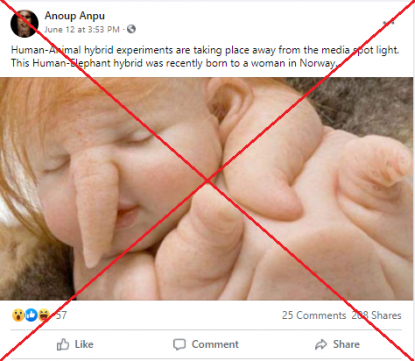 In response to the image, many people made comments raising moral and ethical questions about the field of genetics, while others drew parallels with the timing of the new Netflix drama Sweet Tooth -- which explores the adventures of a boy, who is part human and part deer, in a post-apocalyptic world.

However, a Google search revealed older debunks about this image (see here and here) rejecting claims that millions of Hindus were travelling to Norway to witness what they believed was the reincarnation of the elephant-headed deity Ganesha.

These debunks traced the original claim to a website called Huzlers, which carries the following disclaimer on its page: “Huzlers is a satirical and fictional entertainment blog producing content in such a complex way that it could not conveniently be presented or represented anywhere else but Huzlers!”

A reverse image search of the picture leads to the website of an Australian artist called Patricia Piccinini, who created the piece titled “Newborn, 2010”.

A screenshot of the artwork on Patricia Piccinini’s website

Piccinini’s artwork was made from “silicone, fibreglass, human hair and feral New Zealand possum pelt” and was exhibited in November 2010 at the Roslyn Oxley9 Gallery in Sydney, Australia. 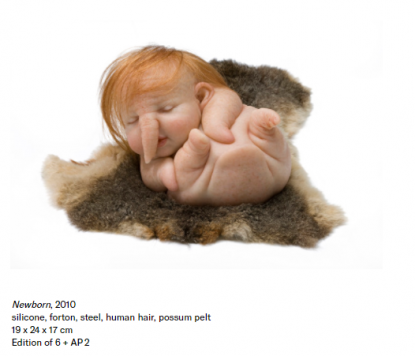 A screenshot of the artwork on Roslyn Oxley9 Gallery’s website

Meanwhile, scientists reported earlier this year that they had successfully grown monkey embryos containing human cells for the first time.

The stated aim of the research is to find human-animal hybrids that could provide better ways of testing drugs and growing human organs for transplants but the science is not without controversy.