Fanged creature is a movie prop, not a real 'werewolf'

Graphic images and a video have been shared thousands of times in separate Facebook posts in South Africa alongside a claim that they show a bloodied 'werewolf' killed by a motorist in the country’s Northern Cape province. But the claim is false: the ‘werewolf’ is a movie prop created by special-effects artist Joseph Rob-Cobasky for an upcoming film.

Four posts, three of them containing a photo and the other a video of what appears to be a dead creature with a wolf’s head and a human body, were published here, here, here, and here on Facebook on July 7, 2021, and have since been shared more than 6,000 times. 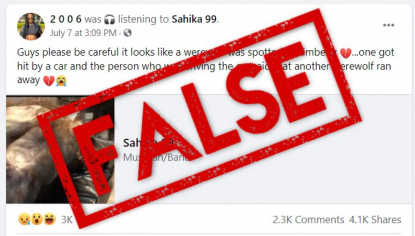 Screenshot of one of the false Facebook posts, taken on July 9, 2021

The posts purport that a “werewolf” was hit and killed by a car in Kimberley, a town in South Africa’s Northern Cape. According to the claim, a second werewolf “ran away”.

The video, also posted on Facebook, shows a bloodied creature -- the "werewolf" -- that appears to be dead. The video's reads, "Things are happening in South Africa". 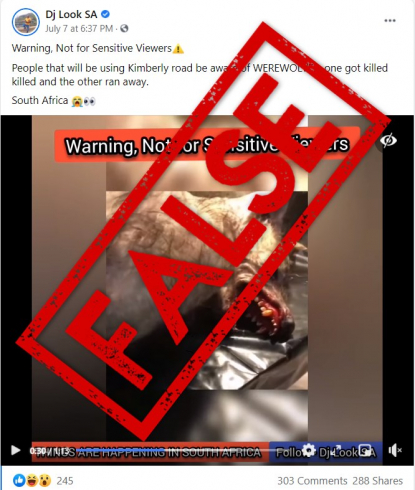 Screenshot of the false video post, taken on July 9, 2021

In English folklore and superstition, a werewolf is said to be a human being who has changed into a wolf or is capable of assuming the form of a wolf. These creatures do not exist in reality.

By conducting a reverse image search, AFP Fact Check found that the “werewolf” in the images and the video was made by Joseph-Rob Cobasky, a special-effects artist.

“The viral images and videos show part of my artwork, something I have been working on for an upcoming film. I am sorry that someone stole it from my page and used it to scare people,” he said.

Through a keyword search with the artist’s name, AFP Fact Check found a tweet posted on June 18, 2021, by Tremulous Motion Pictures, a US television and film production company that clarified that the creation is for a yet-to-be-released film.

Rob Cobasky our Director of Practical Effects on UNSANCTIFIED. Creator of the Werewolf man went viral in Argentina and Brazil when People beloved his Monstrous creature was real. https://t.co/1zSFzZCHmapic.twitter.com/HapBEAJgC2