Images show riot in Chile and a march in the US, not members of Black Panthers destroying churches

Facebook posts claiming to show members of the Black Panthers movement vandalising churches in the United States have been shared hundreds of times online. The claim is false; three of the images show riots in Chile in November 2019 and the fourth depicts an American militia marching in the state of Georgia in 2020.

A Facebook post published on September 1, 2021, by a page in Nigeria includes four images, three of them showing violent protests and a fourth of armed people marching in black clothing.

“Attack of Church in the USA by Black Panthers (sic),” reads the post’s caption. “They’re destroying all church’s in the USA with white statues of JESUS and MARY because they believe it is the origin of evil and racism. Operation destroy what is destroying and Dividing us.” 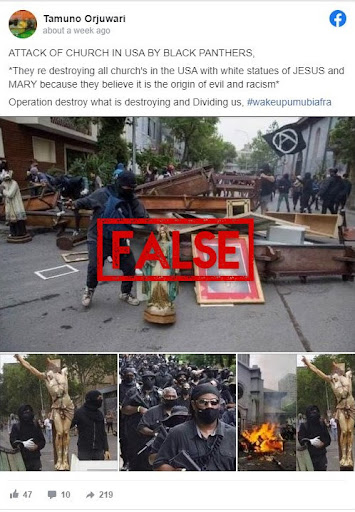 The original Black Panther Party was an African-American political organisation founded in 1966 to counter police brutality against Black people. The organisation’s name was later appropriated by an extremist group with no connection to the founding Black Panthers (see here, here and here).

Posts with the same claim in English were published recently on Facebook here and here, while this 2020 post has started circulating again.

A reverse image search of the first picture showing hooded individuals on a barricaded street, with a person in the foreground holding a statue of the Virgin Mary, led to an article published on November 10, 2019, on the Polish public television channel’s website, TVP Info. The report described anti-government demonstrations in the streets of Santiago, Chile two years ago. The image used with the report is credited to the European Press Agency (EPA).

A search on EPA’s website located the image here, with a caption that reads: “Demonstrators remove objects from the Parish of La Asuncion, during an anti-government protest at the central Plaza Italia in Santiago, Chile, 08 November 2019. A proposed increase in the price of metro fares sparked a series of anti-government protests.” 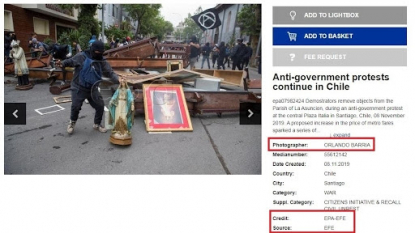 A screenshot of the original image on the EPA website, taken on September 8, 2021

The second image shared in the Facebook post shows two masked men standing next to a statue of Christ, the effigy’s head and left arm missing. Notable features in the image include an individual wearing a white glove, another person with a grey hoodie further behind, and a grey wall and a black gate flanking the road.

While a reverse image search didn’t link this image to any credible news site, AFP Fact Check found a similar photograph here, taken from a different angle but containing the same visual markers. An accompanying report described the scene as a violent protest in front of the Ascension Church in Santiago.

The third image shared in the post shows a fire burning in the street outside the same Ascension Church in Santiago. A reverse image search found this video report from the Russian agency Ruptly, filmed in front of the church during the riots.

A comparison of keyframes from the video with the picture on Facebook shows that it is the same scene, with matching features in both screenshots. The last image shows columns of armed people dressed in black at what appears to be a parade or procession.

A search on Google for the keywords “Black protesters carrying guns” led to articles here and here about the rise of an African-American militia group calling itself the “Not F**king Around Coalition” or NFAC.

On July 4, 2020, NFAC gathered for a rally in Stone Mountain Park in the state of Georgia, calling for the removal of a Confederate monument.

Another article about the Georgia demonstration featured an image similar to the one on Facebook. Screenshot taken on August 9, 2021, with a near-identical image of NFAC in Georgia

A watermark on the picture credits the image to “fredmorrisphoto”. We found an account with the same name on Instagram, with a link to photographer Fred Morris’s website, where a series of images from the Independence Day procession were posted.

An additional search with the keywords “Stone mountain Georgia” on Instagram revealed this account, which posted a number of pictures from the rally, among them images by Morris, including a near-identical version of the photograph shared on Facebook. 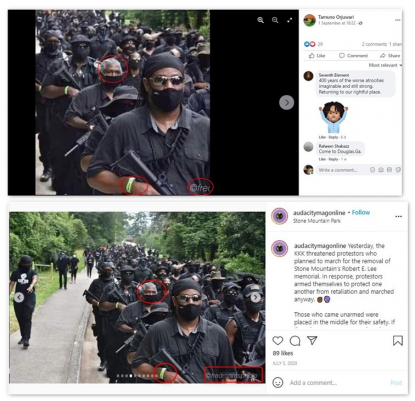 No vandalism of churches was reported during the NFAC protests.