An image of Afghanistan’s ousted president Ashraf Ghani looking through an aeroplane window is circulating in social media posts that claim to show the former leader fleeing the country, leaving Afghans behind when the Taliban seized power in August 2021. The claim is false: the photo was taken a month earlier when Ghani visited Bagram Air Base.

The photo, which was published on a Facebook page called APC United Kingdom, has been shared more than 500 times since publication on August 15, 2021.

APC is Nigeria’s ruling political party, the All Progressives Congress.

“This is the Afghan president fleeing his country. Do you notice that there are no multitude of Afghans in the plane with him? They’ve been left behind to face their fate. America only evacuated their embassy staff. No Afghans,” reads the post shared alongside the image. 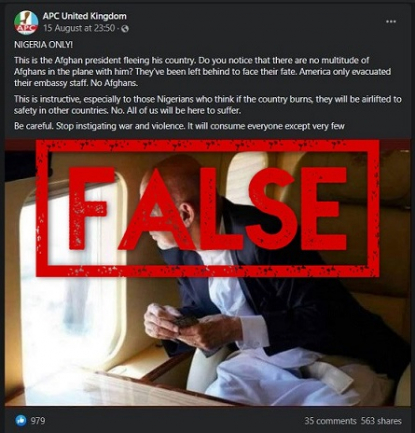 On August 14, 2021, Taliban fighters took over checkpoints across Afghanistan’s capital Kabul and entered the presidential palace after police and other government forces gave up their posts in the city, while Ghani fled the country.

The Facebook post likens the crisis in Afghanistan to an imagined overthrow of Nigeria, where a decade-long Boko Haram insurgency has killed several thousand people.

While Ghani indeed fled Afghanistan following the Taliban’s takeover, the image was taken a month before the events that hastened his departure from the country.

A reverse image search on Bing established the photo was published on July 9, 2021, on the official Twitter and Facebook accounts used by the Afghan presidency while Ghani was still in power.

The photo, alongside several others, was taken during Ghani’s visit to Bagram Airfield, according to a translation of the captions.

Bagram Air Base was the epicentre of American air operations in Afghanistan before the facility was handed over to Afghan forces following the US military’s exit.

The Taliban’s rapid takeover of Afghanistan came about a month after US President Joe Biden unveiled plans to withdraw American troops ahead of the September 11 completion date of a 20-year military mission in the country.

The Taliban's takeover of Afghanistan has led to many false and misleading claims, some of which AFP Fact Check has debunked here, here, here and here.