A video has been viewed thousands of times in multiple Twitter and Facebook posts that claim it shows Afghan women being auctioned on a street. The post circulated online in August 2021 after Taliban insurgents seized control of Afghanistan. The video, however, has been shared in a false context: the footage in fact shows a stunt by Kurdish activists in London in 2014.

"Once the Afghans auctioned our daughters for two dinars. Now, their own daughters are being auctioned," reads the Hindi-language tweet. 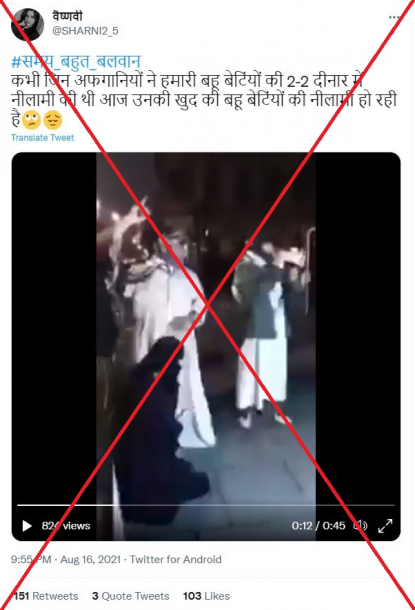 The video shows a group of men standing around a burqa-clad woman, who is kneeling on the ground.

One man can be heard speaking into a megaphone, appearing to auction off the woman as men in the crowd shout out their bids.

The video has been viewed more than 7,000 times alongside a similar claim in Twitter posts here and here; and in Facebook posts here, here, and here.

A reverse image search on Google using keyframes captured from the video found a longer version of the video published here on YouTube on October 7, 2017.

It is titled: "auctioning women on the street of London .mp4".

The other misleading posts also share longer clips from the same video.

A keyword search on Google found several credible news reports from 2014 indicating that the video shows a stunt by activists in the British capital of London.

The BBC reported that the video shows a mock "Islamic State sex-slave market" staged by Kurdish activists on October 14, 2014, in London.

Although the original video of the performance is no longer available on YouTube, the BBC report includes a short clip from the same event.

The clip shows several women with their hands chained, while a man appears to welcome people to the "ISIS sex-slave market".

A member from the Kurdish activist group told Newsweek that they staged the auction to highlight the "crimes that ISIS are committing in Iraq and Syria".

During its control over large areas of Syria and Iraq, the Islamic State detained thousands of girls and women. In 2016, the United Nations issued a report on this subject, finding accounts of sexual slavery and abuse by the ISIL against Yazidi women in Iraq.

A photograph from the 2014 street performance in London has also recirculated online following the Taliban takeover in August 2021.

It has been shared thousands of times in Facebook posts in Greece here and in Spain here and here. 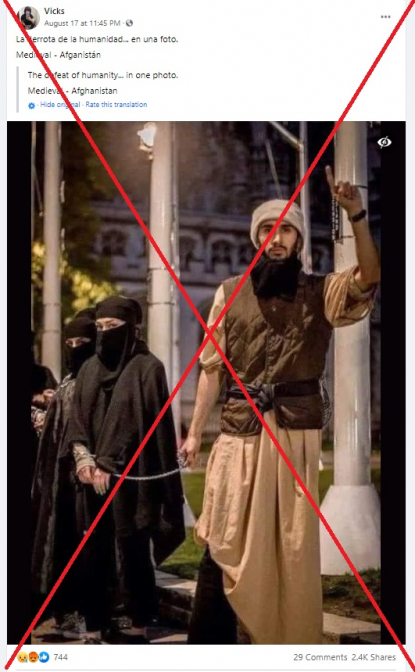 AFP has previously debunked claims in Arabic that this same photo showed Syrian and Iraqi women being sold in a slave market by the Islamic State.

The same photo was shared in a tweet dated October 2014, stating it was taken during a demonstration in London.