Skip to main content
Afghanistan's President Ashraf Ghani looks on while attending a Joint Coordination and Monitoring Board meeting (JCMB) at the Afghan presidential palace in Kabul on July 28, 2021. ( AFP / SAJJAD HUSSAIN)

As Taliban fighters seized control of the Afghan capital Kabul, a video was viewed thousands of times in Facebook and Twitter posts purporting to show President Ashraf Ghani fleeing the country. However, the posts are misleading; the footage in fact shows Ghani heading to a conference in Uzbekistan in July.

"President Ashraf Ghani of #Afghanistan Escape the country to Tajikistan today, along with his close assistants," reads a Thai-language tweet posted on August 16.

"He will continue on to another country later. Before leaving, he recorded himself n advance saying he would take responsibility for keeping the Kabul people safe if #Taliban enters Kabul. However, he abandoned his people in the end."

The video -- which has been viewed more than 200,000 times -- shows Ghani waving to onlookers as he walks up a flight of steps onto a plane. 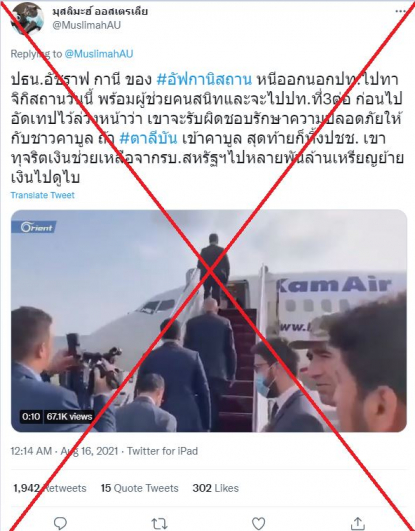 The video was shared in similar social media posts around the world, including in India, Germany and Pakistan.

Ghani fled Afghanistan on August 15 as the Taliban reached Kabul to seal a nationwide military victory.

In just over a week, the Taliban carried out a lightning sweep of the country, with troops incapable of holding onto territory as the US military finalised its withdrawal after 20 years in the country.

Ghani did not say where he had travelled to, but media reports suggested he had gone to Tajikistan.

However, the posts are misleading; the video does not show Ghani leaving the country after the Taliban seized Kabul.

A reverse image search on Google found identical footage published on Facebook on July 15 by Kabul's Hamid Karzai International Airport in a post about Ghani's trip to Uzbekistan.

Below is a screenshot comparison of video in misleading posts (left) and the video posted by Kabul airport in July (right):

Keyword search on Google led to an Afghan government statement published on July 15 titled, "President Ghani leaves Kabul for Uzbekistan", which features a screengrab from the video.

"President Ashraf Ghani at the top of a high-ranking government delegation left Kabul for Uzbekistan to participate in the International Conference “Central and South Asia: Regional Connectivity; Challenges and Opportunities," the statement read. 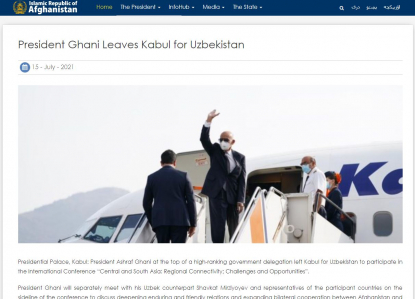 Screenshot of the official Afghan government's statement, taken on August 16, 2021

A transcript of Ghani's speech to the conference was published on the Presidential Palace's website here on July 17.

AFP did not find any footage published by reputable media of Ghani leaving Afghanistan on August 15.