The plight of children in Afghanistan has received renewed global attention following the Taliban’s sudden return to power in August 2021. Online users across Africa have been sharing harrowing pictures of minors, linking them to current events in the capital Kabul. They include several posts — one with more than 13,000 shares — featuring the image of a weeping girl. In reality, this particular photo was taken in Gaza and AFP Fact Check has previously debunked the same image as part of a different claim. The Afghan conflict has seen thousands of children killed over the past two years alone, according to the United Nations, prompting its children’s agency UNICEF to call the country one of the “worst places on earth to be a child”.

This Kenyan Facebook post has been shared more than 13,000 times since it was published on August 16, 2021, as the Taliban was cementing its takeover of Afghanistan.

“The images coming from Kabul are heart-wrenching,” the caption reads. “It reminds me of the suffering experienced by victims of conflict all over the world.” 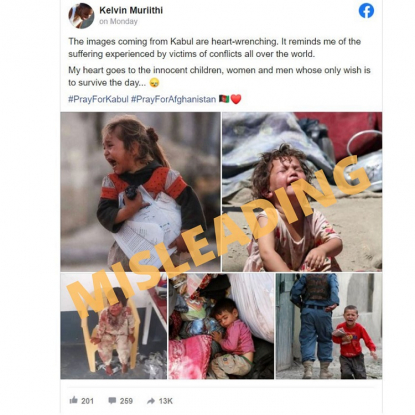 A screenshot taken on August 18, 2021, showing the misleading post

Five pictures of different children in various scenes of distress are included in the post.

A similar claim is made in another Facebook post from Kenya, which uses one of the five images, purporting to show a child from Afghanistan who has “probably ... lost touch with the parents in the rush to safety as the Taliban regime takes control”.

The Taliban’s comeback has sparked global concerns over the Islamists’ brutal human rights record and seen tens of thousands of Afghans trying to flee the country.

Both Facebook posts reflect the global concern for the welfare of Afghanistan’s children at this time, but the pictures they share are better understood with further context.

An image from Gaza

AFP Fact Check debunked one of the photos in May and established the picture of the distraught girl clutching books was taken in Gaza in 2014.

Using multiple reverse image searches, we traced the picture to a Pinterest post featuring a copy of the picture with a watermark for “Fadi Thabet Photography”.

An online search for the name led to a December 20, 2019, Facebook post by Palestinian photographer Fadi Thabet, as well as a YouTube interview with him dated August 6, 2019. 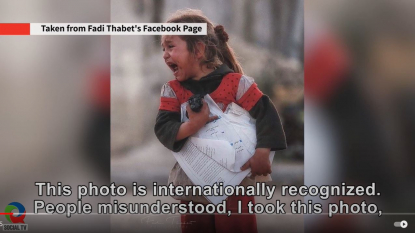 A screenshot taken on August 8, 2021, showing the image from a Thabet interview.

During the video interview, Thabet explained that the image, taken in northern Gaza in 2014, has frequently been used out of context, sometimes to illustrate the Syrian or Afghan conflicts.

The remaining four pictures feature children in Afghanistan but not all are recent. For example, the image of a tearful child running down a road is from May 2013 and was taken by a Reuters photographer during a Taliban attack in Kabul. AFP reported on the offensive here. 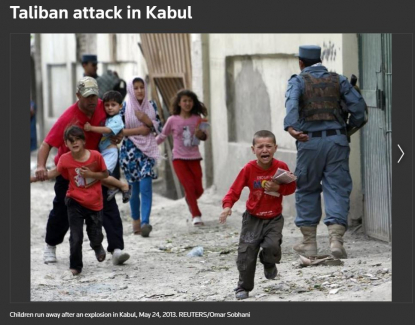 A screenshot of the 2013 Reuters report showing the image

Another image of a young boy covered in blood and sitting on a plastic chair also predates the Taliban's recent capture of Kabul by at least a year.

AFP Fact Check found the earliest version was used in a June 29, 2020 report by Syrian news outlet Step Agency and by Afghan media. The reports linked the image to the aftermath of an attack on a cattle market in the Sangin district of Helmand province, southern Afghanistan. 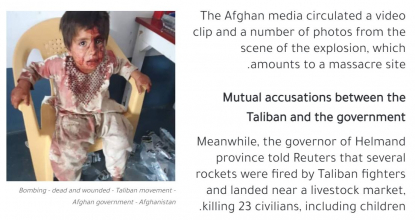 AFP archives showed there had indeed been a deadly explosion at a cattle market in Sangin, with victims brought to a hospital in Lashkar Gah on June 29, 2020.

Of the remaining two pictures shared in the post, one was taken by a Reuters photographer on August 10, 2021. According to the caption, it shows an internally displaced Afghan child forced to flee their home amid clashes between the Taliban and government forces.

The last image of a little child crying was posted and watermarked by Afghan media outlet Pajhwok News on August 10, 2021. In its Facebook post, Pajhok said one of its journalists had taken the photo in Kabul while reporting on the many people who fled to Kabul from other parts of Aghanistan as the Taliban conquered the country.

Big news events like conflicts and humanitarian crises often lead to people sharing images or videos without always verifying their origins. AFP Fact Check shares easy-to-follow tips on how to check if a photo really shows what the post claims: