Nigerian separatists circulate photos unrelated to the arrest of their leader

A collage of several images has been shared in multiple social media posts claiming to show Kenyan police officers arresting the leader of the Indigenous People of Biafra (IPOB), Nnamdi Kanu, upon his arrival in the East African nation. However, the claim is false: AFP Fact Check’s investigations revealed all the images but one were unrelated to the arrest of the separatist leader.

The earliest version of the claim was published alongside the photos on July 6, 2021, by a Facebook page called The Republican News, according to social media monitoring tool CrowdTangle. “The video evidence obtained by The Republican News has revealed the lies told Kenyan President, Uhuru Kenyatta, Kenyan High Commission to Nigeria about their role in rendition that brought Nnamdi Kanu to Nigeria (sic).”

The post has since been circulated on Facebook by pro-Biafran accounts, including this one with more than 1,300 shares.

Members of the Indigenous People of Biafra (IPOB) are fighting for an independent state for the Igbo people in Nigeria’s southeast region. Kanu, who leads the proscribed separatist group, was arrested and “brought back” to the country to face trial last month, according to Nigeria’s Attorney General Abubakar Malami.

However, the collage circulating online features several old images that are unrelated to the arrest of the IPOB leader.

A reverse image search conducted on the first photo, which shows people sitting at what appears to be an airport departure lounge, led to a 2013 story published on the website of Nigerian daily newspaper The Nation. 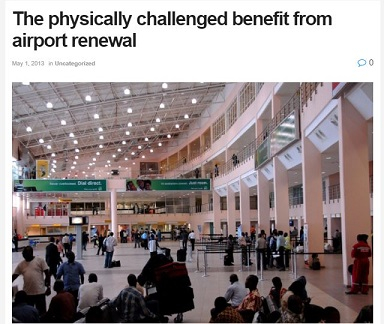 By accessing the photo’s metadata using the InVID WeVerify tool, AFP Fact Check found that the image was originally taken on November 14, 2007— more than 13 years before Kanu’s latest arrest.

A search for the two photos of uniformed men pointing guns at flight passengers disembarking a plane revealed the pictures were published by the Kenya Airports Authority on Twitter and Facebook on May 19, 2015.

The two images are among several others taken on that date during a security drill conducted at the airport by the Recce Squad— a special forces unit in the paramilitary arm of the Kenya Police Service—according to airport authorities. 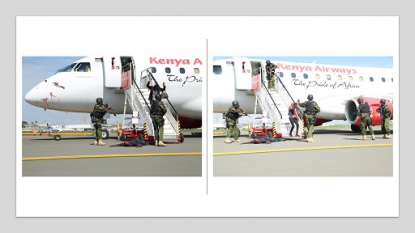 Photo of arrest in El Salvador “Two Interpol officers lead Juan Elias Rodriguez Luna (C) -a member of youth gang ‘MS’- upon his arrival at the international airport in Comalapa,” the photo’s caption reads. “Rodriguez Luna is considered ‘one of the most wanted’ criminals after escaping from prison and fleeing to the United States, where he was caught and deported to serve his sentence”.

AFP Fact Check traced the image of Kanu in handcuffs to an article on Nigerian online newspaper TheCable. 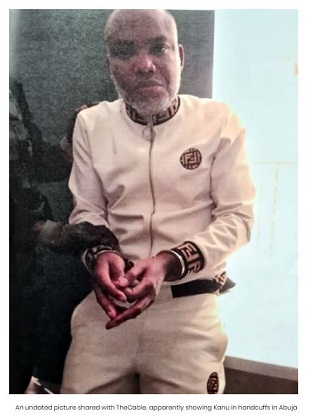 Screenshot of Kanu’s image on TheCable’s website, taken on July 20, 2021

The photo directly to the left of the image of Kanu in handcuffs is actually of the president of Kenya, Uhuru Kenyatta.

IPOB supporters regularly share misinformation on social media, some of which AFP Fact Check has debunked here, here and here.