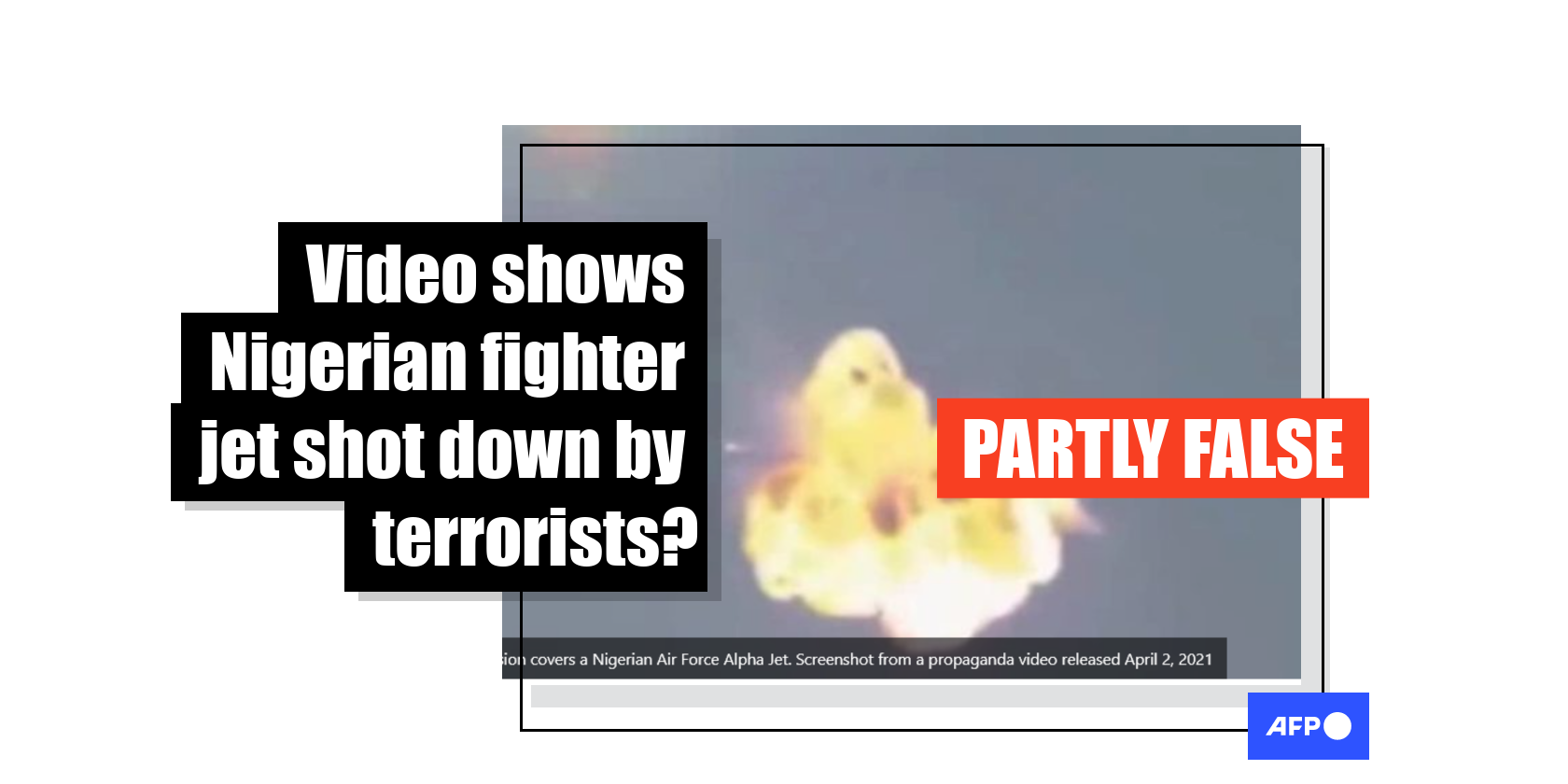 Terrorist group Boko Haram has released a video that includes footage of a mid-air explosion, claiming it shows a Nigerian Air Force jet shot down by insurgents in Borno state. This is false; the exploding aircraft seen in the beginning of the video was a Syrian military helicopter shot down by rebels in 2012. Although the rest of the video appears to show the remains of a Nigerian Air Force jet that recently disappeared from radar with two pilots on board, officials dispute that the plane was shot down.

The Nigerian Air Force confirmed on April 1, 2021 that one of its fighter jets had lost contact with radar communications the day before in Borno state in northeastern Nigeria. Spokesman Edward Gabkwet said the aircraft had been supporting ground troops in the region when it went missing around 5:08 pm on March 31, 2021.

Terror group Boko Haram responded with a video on April 2, 2021, showing wreckage from a jet that it claimed to have shot down. Markings on the plane’s fuselage matched the registration number of the missing aircraft.

To support the claim that the jet was shot down, the video opens with a scene of an aircraft exploding in the sky. This video, shared more than 3,700 times here on Facebook and reported on by local media, was posted with a caption that read: “Boko Haram Release Video Showing How They Shot-Down The Nigerian Air Force Jet, Killing The Pilot…” 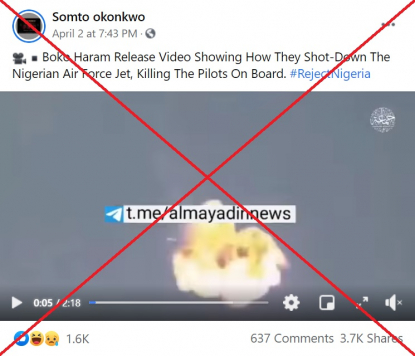 A screenshot of a post with the doctored video, taken April 6, 2021

Another Boko Haram video, which starts with footage of insurgents shooting into the bush and includes the same clip of an aircraft exploding, has been shared multiple times here on Facebook with the claim that this was “how boko haram allegedly brought down the Nigerian airforce fighter jet”.

On April 3, 2021, Hugo Kaaman, an independent security researcher, shared a video on Twitter casting doubt on Boko Haram’s claims, saying the militants “took a 2012 video showing a SyAAF helicopter exploding mid-air over Idlib and superimposed it” to give the impression its fighters had shot down the jet.

Boko Haram just released a video claiming it shows a NAF jet shot down by the group. Looking at the video, it appears as if the jet explodes mid-air. However, this is not true. BH took a 2012 video showing a SyAAF helicopter exploding mid-air over Idlib and superimposed it. Weak pic.twitter.com/f6dNFJ5dXO

Using video verification tool InVid by WeVerify, AFP Fact Check found that this portion of Boko Haram’s video had been on the internet for at least eight years and could not have shown events from March 2021. 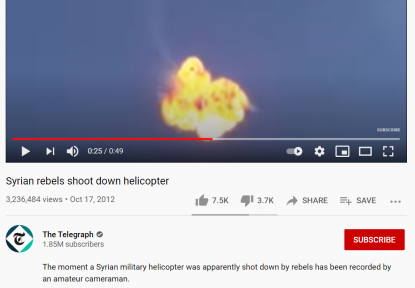 A screenshot taken on April 6, 2021 showing the original footage from 2012 used by Boko Haram in its video

According to The Telegraph, the visuals from 2012 show “the moment a Syrian military helicopter was apparently shot down by rebels” a year into the now decade-long civil war. 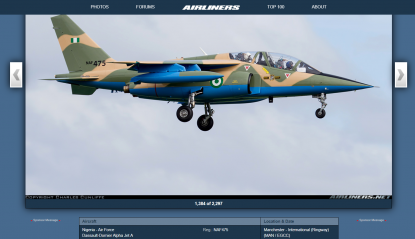 A screenshot taken on April 6, 2021, showing a 2015 image of the Nigeria Air Force “Alpha-Jet” that went missing and is feared to have crashed

The rest of the propaganda videos show the demolished fuselage of an aircraft bearing the registration “NAF 475”, the same number on the jet that went missing in March.

A Boko Haram fighter parades past the wreckage, claiming “God enabled the fighters to bring it down”.

The closing sequences of the videos reveal what looks like a pilot’s corpse and scattered personal effects, including a piece of paper labelled “Brief on Nigerian Air Force Alpha Jet Fleet”.

The Nigerian Air Force confirmed on social media that one of its jets - bearing the registration tag NAF 475 - crashed in Borno, where Boko Haram has carried out attacks for more than a decade. However, the statement by the air force disputes the claim that the jihadists had brought down the jet.

“It is evident that most parts of the video were deliberately doctored to give the false impression that the aircraft was shot down,” reads part of the Air Force statement.

“It is almost impossible for an aircraft to have exploded mid-air, in the manner depicted in the video, and still have a good part of its fuselage, including its tail, intact,” it adds.

John Abolarinwa and Ebiakpo Chapele were the two pilots on board and both have been declared missing by the Nigerian Air Force.