Femi Adesina, who serves as special adviser on media and publicity to Buhari, said during an interview on March 28, 2021 that more Nigerians were unemployed in 2015 than today.

“If you recall in 2015, buildup to the 2015 election when APC was campaigning, the figure that was used by the then candidate Buhari was that [a] minimum of 30 million Nigerians were out of jobs, were unemployed, particularly youths,” Adesina said in response to a question about high unemployment during a broadcast on Channels Television, a popular TV station in Nigeria.

What did APC Manifesto claim?

When All Progressives Congress (APC) - Buhari's party - launched its manifesto ahead of the 2015 elections, it relied on similar unemployment figures to convince voters that Buhari was the fit choice for president.

“Unemployment is at crisis point in Nigeria – even unreliable official figures put it at over 30%, up from 5% a decade ago,” the party wrote in its manifesto.

In Nigeria, unemployment includes all people aged 15 to 64 who are willing and able to work and actively looking for a job without success.

Labour force reports published by the National Bureau of Statistics (NBS) for 2014 and 2015 reveal that at no point in the year prior to Buhari taking office were 30 million Nigerians unemployed.

Buhari was elected president on May 29, 2015 – the second quarter (Q2) of 2015 - when there were 6.1 million unemployed Nigerians. Another 13.5 million people were considered underemployed, which is categorised as those working less than 40 hours per week, or in jobs that underutilise their qualifications.

Data from the Central Bank of Nigeria (CBN) corroborate official statistics by the NBS, which suggests that Buhari and his supporters exaggerated unemployment figures during his election campaign. Even when including statistics of underemployed Nigerians, Buhari's numbers were overblown.

At the time, the NBS reported that the “labour force population (i.e those within the working age population willing, able and actively looking for work) increased to 75.9 million in Q3 2015 from 74 million in Q2 2015”.

Based on all the government’s statistics, Buhari began his term of office with the unemployment rate at 8.2 percent.

This contradicts the party’s other claim in their manifesto: the unemployment rate was “over 30%”. While it was true that unemployment was highest among youth, the numbers cited by the APC were inflated. The table above shows labour force statistics from when Buhari was announced APC candidate in December 2014 until after he was elected president. 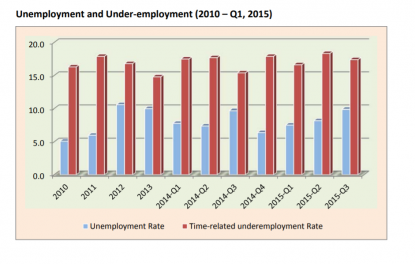 It should be noted that the NBS reviewed its methodology for calculating unemployment in May 2015, but the data used in the reports and analysed by AFP Fact Check had been standardised by NBS to ensure uniformity.

In 2020, the unemployment rate in Nigeria hit a record high of 33.3 percent. According to the National Bureau of Statistics, this means 23.19 million Nigerians were unemployed. Nigeria has seen a rise in both inflation and unemployment, leading Nigeria to have one of the highest number of unemployed people in the world.