Skip to main content
Soldiers stand at attention as the national flag is lowered as part of a daily ceremony at the Galle Face Green promenade in Colombo. (AFP / Ishara S. Kodikara)

Four photos have been shared thousands of times in multiple Facebook posts alongside a claim that Sri Lankan government officials destroyed harmless stationery goods after they were smuggled into country. The posts, which question why the harmless goods were destroyed, omit important context. The photos have circulated since 2018 in reports about smuggled stationery goods that were destroyed because they contained toxins.

The post’s Sinhala-language caption translates to English in part: “Remember how the Lankan government destroyed a haul of school stationery without allowing anyone to use them, claiming it was because they were imported illegally? But they don't do the same thing to toxic coconut oil.” 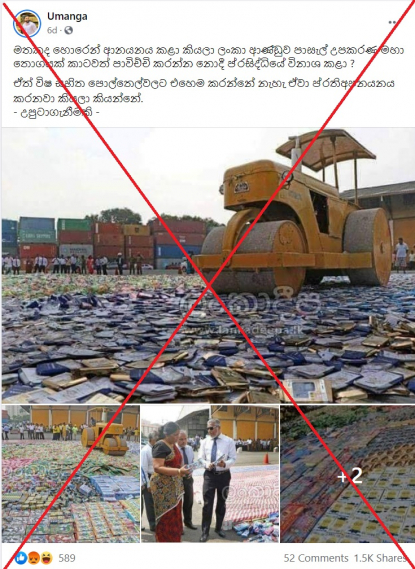 A screenshot of the misleading post, taken on April 5, 2021

The post circulated online after Sri Lanka authorities confiscated quantities of imported coconut oil that were found to contain a cancer-causing toxin.

Comments on the post from some Facebook users suggest they mistakenly believed the stationery goods pictured in the photos were destroyed despite being harmless.

One user wrote: “What a stupid act. How many children are in this country who wish to learn but are unable to because of economic hardships? Would it have been a crime to have distributed these goods to them?”

The same photos were shared alongside a similar claim in Facebook posts here, here and here.

These posts omit important context: the stationery goods shown in the photos were destroyed because they were found to contain cancer-causing toxins, according to local reports.

Reverse image and keyword searches on Google found the photos correspond to the event shown in this photo story published on Lankadeepa - a Sinhala language newspaper - on January 22, 2018.

It is headlined: "Goods worth Rs. 31 million nabbed by Customs, destroyed".

The photos were also published in this report by the Sri Lankan Daily Mirror news published on January 23, 2018. The headline reads: "Customs destroy 130,000 counterfeit items worth Rs. 31 mn".

In the Daily Mirror report, a Sri Lanka customs official was quoted as saying: “These goods are carcinogenic. A lot of stationery is among these goods and have been made using low-quality plastics that are extremely toxic.”

Below are a set of screenshot comparisons of photos in the misleading post (L) and their corresponding images from the 2018 news report (R): 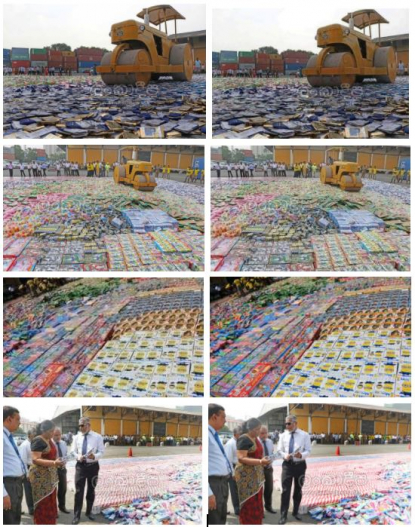 The event was also covered by local media News First.

A Sri Lanka customs spokesperson told AFP the goods shown in the misleading posts were destroyed because they were toxic.

In a phone interview on April 5, 2021, the spokesperson said: “Local markets are flooded with these products and we wished to set an example to the world by putting a stop to the entry of these goods into local markets not simply because they were in violation of intellectual property rights but also because they are a grave health hazard.”