This is an old video, not footage of the jet crash that killed Nigeria's army chief

A video of what appears to be the aftermath of a plane crash is being shared alongside claims that it is footage from an accident on May 21, 2021 that killed Nigeria's top-ranking army commander Ibrahim Attahiru and 10 other officers. The claim is false;  the video was filmed in 2018 and does not show the recent plane crash.

The video, viewed more than 5,500 times here on Facebook, is being shared with a claim that it was taken during the crash of the military aircraft carrying Ibrahim Attahiru, chief of army staff (COAS) in Nigeria, and 10 other officers.

“Watch Eye witness during the plane crash that claimed the life of COAS and other soldiers,” the caption reads. 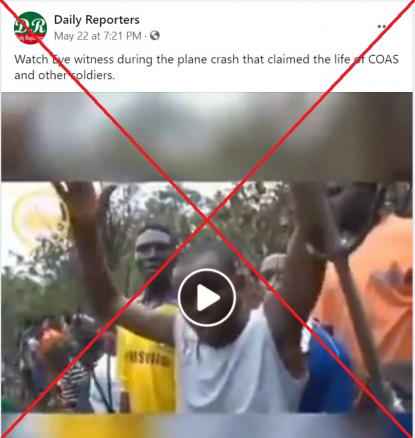 The same video has been shared here, here and here with similar claims that it shows the recent crash in Nigeria.

Although the army commander and 10 others were indeed killed in a recent plane crash, this video is from 2018.

Reviewing the video, AFP Fact Check could hear the main speaker saying in pidgin English: “people talk say na rider him dey do”.  Translated to English: the pilot of the plane was conducting precise maneuvers, dipping down and back up. Such maneuvers often occur at military graduations or military-related celebrations in the country.

AFP Fact Check searched for multiple keywords, including “military air crash in Nigeria” and “celebration”. The results led us to this video, which reported on a collision between two military aircraft during flight maneuver rehearsals ahead of Nigeria’s 58th independence anniversary celebrations in Abuja in September 2018.

A query for more videos from the 2018 crash led us to the exact footage here. In reality, the post falsely claiming to show the recent crash features a 30-second clip from a longer video on the 2018 crash.

AFP reported on the 2018 crash here. The 2021 incident, which is the second military plane crash this year, was reported on here and here.