Skip to main content
The image above was used in Facebook posts to falsely claim that it shows Nigerian forces conducting an operation against a militia group in Orlu state (Photo: Stefan HEUNIS / AFP)

An image of a soldier rappelling from a chopper has been shared hundreds of times in Facebook posts with claims that it shows the Nigerian army attacking a local militia using a “war helicopter”. Although there has been a resurgence of unrest in the country’s southeastern region, prompting a response from the military, this image is actually an AFP photo from 2018 taken during a training demonstration.

“Breaking New! Nigeria Army is currently attacking ESN with war helicopter in Orlu Imo state. They had declared war in our land (sic),” reads the caption.

The image was also shared alongside a similar claim in this Facebook post, as well as in this publication by a pro-Biafran website, Daily Time TV.

Clashes erupted between the Nigerian army and the ESN in the city of Orlu last month and at least one person was killed in the unrest, AFP reported.

Orlu is located in Nigeria’s southeast. The area has long been home to separatist groups, and tensions between federal security forces and the indigenous Igbo population are high.

Matters escalated again last week with the deployment of armed forces and helicopters to search the area for an ESN base.

Image was taken in Abuja

However, the image is being passed off as part of the military operation in Orlu when, in fact, it was taken near the capital Abuja three years ago.

AFP Fact Check ran a Google reverse image search and found the picture belongs to AFP and was published for illustrative purposes in a Nigerian daily newspaper, Vanguard, in May 2018.

AFP Fact Check confirmed that the image, still available in our archives, was taken by AFP photographer Stefan Heunis on April 17, 2018. 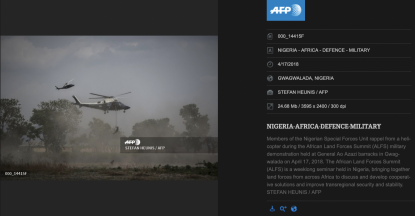 A screenshot of the original AFP photo from April 17, 2018

The caption reads: “Members of the Nigerian Special Forces Unit rappel from a helicopter during the African Land Forces Summit (ALFS) military demonstration held at General Ao Azazi barracks in Gwagwalada on April 17, 2018.” Gwagwalada is an area council just west of Abuja and more than 400 kilometres from Orlu.