Facebook and Twitter posts claiming that Indian climate activist Disha Ravi has a Christian surname have been shared thousands of times since the 22-year-old was arrested in February 2021. The posts claim that Ravi, who was detained for allegedly helping to create a guide for anti-government farmers protests shared by environmentalist Greta Thunberg, is actually called “Disha Ravi Joseph”. The claim, however, is false: official Indian government records show Ravi’s full name is Disha Annappa Ravi.

The claim was made in a text graphic published on Facebook here on February 17, 2021.

The Hindi-language text translates to English as: “The tool kit girl is being referred to as Disha Ravi by the media, her full name is Disha Ravi Joseph. What is the problem in calling her by her original name?” 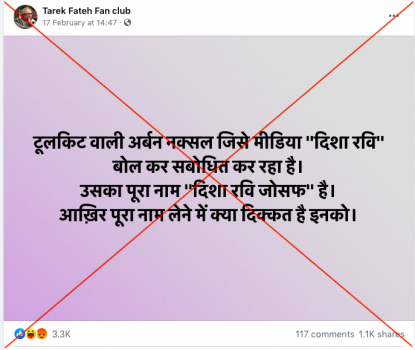 The post circulated days after Ravi was arrested by police on February 13, 2021.

Police alleged she helped create a “toolkit” guide to the anti-government farmer protests that was tweeted by environmentalist Greta Thunberg, as AFP reported here.

Similar claims about Ravi’s full name and about her being Christain were also published on Facebook here, here, here and here; and on Twitter here and here.

Below is a screenshot of Ravi’s details listed on the voting portal with her voting ID number redacted by AFP for privacy: 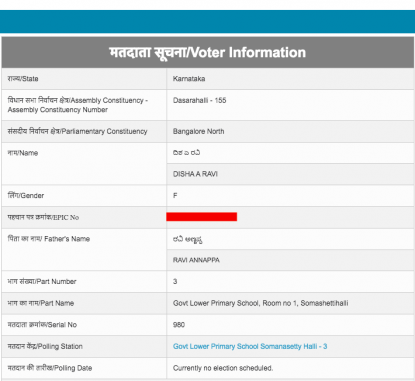 The article quotes a “lawyer and close friend of Disha's family” who told The News Minute that Ravi’s “full name is Disha Annappa Ravi. Her mother's name is Manjula Nanjaiah, father is Ravi Annappa.”