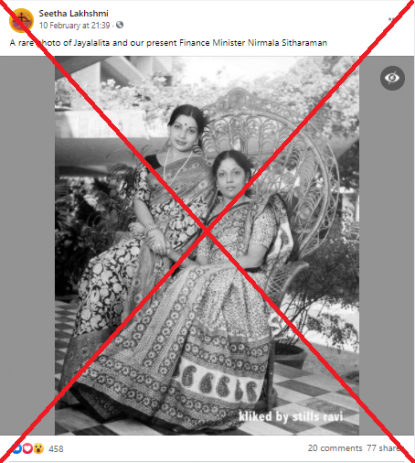 “A rare photo of Jayalalita and our present Finance Minister Nirmala Sitharaman,” says the post’s caption.

Jayalalita refers to popular actress-turned politician and former chief and the southern Indian state of Tami Nadu, who died in December 2016 following a prolonged illness as AFP reported here.

Nirmala Sitharaman is the current finance minister of India.

The photo has been circulated in the wake of the upcoming state assembly polls in Tamil Nadu, where India’s ruling BPJ has formed an alliance with the local ruling All India Anna Dravida Munnetra Kazhagam (AIADMK) - a regional party formerly led by Jayalalitha, as reported by Indian daily newspaper Hindustan Times.

The photo was also shared here, here, here and here on Facebook alongside the same claim.

An analysis of the photo found the text of “kliked by stills ravi” seen on the bottom-right corner as highlighted in red in the screenshot below:

A keyword search on Google found that “stills ravi” is an alias for photographer Ravi Varma V, who has been working in the “film industry for more than 40 years”.

A further search on Ravi Varma V’s Facebook page found the same photo posted here on May 30, 2020, with the post’s caption stating that the photo was taken by Ravi and the woman seen beside Jayalalitha is Tamil writer Sivasankari. 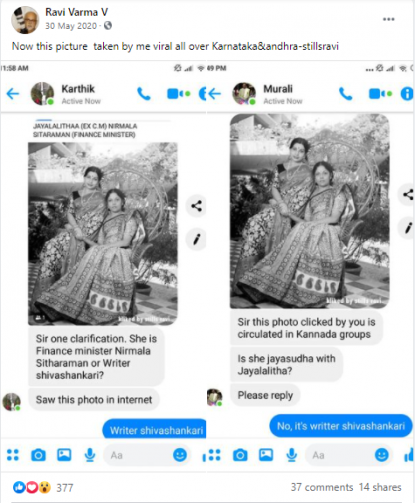 According to this article published on Indian newspaper DT Next on Jayalalitha’s second death annivarsary, she and Sivasankari were close friends and they were often photographed together.

Meanwhile, as seen in the photo comparison below, facial features of young Sitharaman’s photograph on Indian news portal Asianet News (L) do not match with the lady sitting beside Jayalalitha (M), but significantly match with the Tamil writer Sivasankari’s photo (R) published here alongside her detailed profile on Veethi.com, a website that profiles people and places from southern India.