No, these photos do not show Kenyan troops during the strike at Nairobi’s airport

Dramatic photos purporting to show the Kenyan military being deployed at Nairobi’s international airport during a strike are circulating on social media.  Members of the Kenya Defence Forces were indeed deployed to Jomo Kenyatta International Airport on Wednesday to help screen passengers -- but the photos date back to 2015 and show elite police during a security drill at the airport. 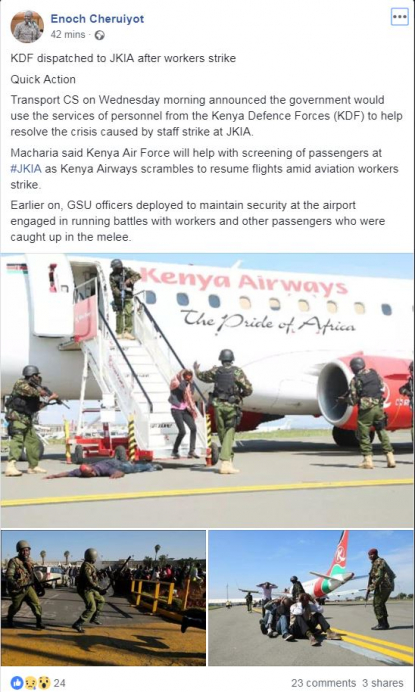 Several Twitter users also shared the same images but deleted them when people pointed out the error. 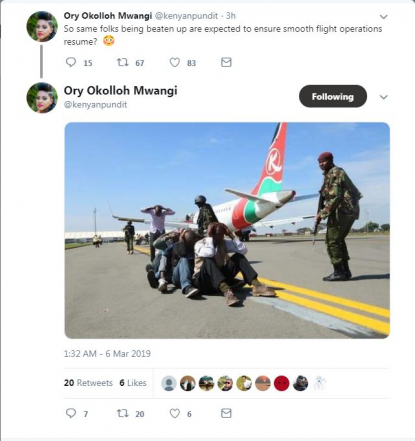 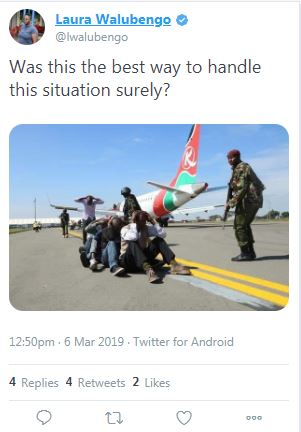 The misleading images were also circulating on WhatsApp groups. AFP’s fact-checking reporter in Nairobi was among those who received them via the messaging app.

But a reverse image search shows that the pictures were taken on May 19, 2015, during a security drill conducted at the airport by the Recce squad, a special force unit in the paramilitary arm of the Kenya Police Service.

You can see them in a tweet by the Kenya Airports Authority on that date, thanking the officers who performed the drill.

Special thanks to the GSU Recce team & the Police for supporting today's #JKIADrill pic.twitter.com/gzLtXJEBdG

As AFP reported here, hundreds of travellers found themselves stranded for hours at the Nairobi airport on Wednesday due to a strike by staff, who faced off with riot police at what is East Africa’s busiest air traffic hub.

Riot police fired tear gas at the workers, who were angry about a planned takeover of the airport by national carrier Kenya Airways.

Soldiers were also deployed to help screen the passengers as Kenya Airways staff and security personnel took over the duties of the striking workers.

By late afternoon, Kenya Airways said most of its affected departing flights had been rescheduled and should leave before midnight.