A photo of an orangutan in a bag has been shared on Facebook in South Africa and Kenya alongside a claim that looters had stolen monkeys, pythons and a shark from a zoo in Durban during the recent unrest in South Africa. But the claim is false: the orangutan in the picture was recovered from a poacher in Indonesia in 2015, while Durban authorities denied any animals had been stolen by looters.

The post has been shared more than 140 times since it was published on Facebook on July 12, 2021. The image within it shows two bags: the one on the left contains an orangutan, while the bag on the right is more obscured, making it difficult to discern its contents, although part of another primate’s arm appears to be visible. 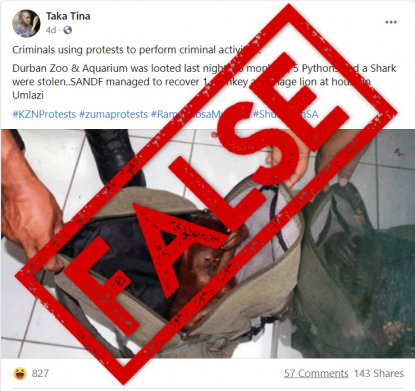 South Africa experienced days of unrest marked by looting, protests, and violence that were sparked by the jailing of former president Jacob Zuma, who is serving a 15-month sentence for contempt of court. AFP reported that more than 200 people had died in the violence.

The government deployed 25,000 military troops to work jointly with the police to restore order.

During the chaos, misinformation and unverified claims circulated on social media, some of them debunked by AFP Fact Check (see here, here, and here).

But the claim that the photo shows animals looted from a zoo in Durban is false.

Orangutan recovered from a poacher in Indonesia

A reverse image search revealed that the photo shows an orangutan recovered from a poacher in Sumatra, Indonesia in April 2015. The image is credited to the Wildlife Conservation Society of Indonesia. The post’s caption also claims that the animals were stolen from “Durban Zoo & Aquarium”, but there is no such facility in the wider Durban area.

A spokeswoman for uShaka Marine World, an aquarium and water park in Durban, told AFP Fact Check that the facility had not been looted.

“uShaka is the only aquarium in Durban and we are currently closed for business due to Covid-19. Our facility was not vandalised by looters,” said the spokeswoman.

The Durban Central South African Police Service (SAPS) said that it had not received any reports about animals stolen from any sanctuaries in the area during the weeklong unrest.

“All the police activities in the KwaZulu-Natal region were coordinated from this office and we received no reports of missing animals from the animal conservancies in the region during the riots,” said a police spokesman.

“Please note that no animals were looted from our zoos. These rumours are false,” said Nsele. “In fact, we are pleased to announce that the Umgeni Bird Park and the Mitchell Park Zoo opened their doors to the public today.”