Two videos have been shared on social media in South Africa with claims that people protesting the jailing of former president Jacob Zuma had torn down fences surrounding a game park in KwaZulu-Natal, allowing wild animals to escape. The claims are false: both videos predate the violence and destruction that have swept parts of South Africa in recent days.

“Protesters have pulled down the fence at the Hluhluwe Game Reserve to let the animals out,” reads a tweet from July 11, 2021. "Watch out for lions".

An accompanying video filmed from a helicopter shows a long section of broken fencing in the bushveld. 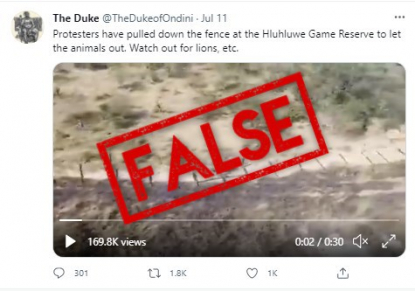 The claim was tweeted along with the video amid days of widespread looting and disorder in South Africa, sparked by the imprisonment of former president Jacob Zuma earlier this month.

A second video, published on Facebook a day later, shared a similar claim but with grainy footage of dogs and an elephant running across a tarred road ahead of an approaching police van. 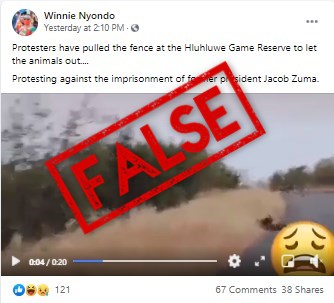 The Facebook post's caption linked the video of the roaming animals to protests against Zuma’s incarceration.

However, in both cases, the claims are false, and the videos are unrelated to the current wave of violence that has rocked the country.

The video of the broken fencing was filmed in May 2021 during a community protest when locals damaged the security perimeter at Hluhluwe iMfolozi Park in KwaZulu-Natal, the same province where Zuma hails from.

Ezemvelo KwaZulu-Natal Wildlife, the state authority in charge of the park, clarified in a Facebook post on July 12, 2021, that the game reserve was unaffected by the current unrest.

“Please note that the video currently being circulated purporting to show that the Hluhluwe iMfolozi Park’s fence has been destroyed is an old video,” reads the post, adding that the footage was taken by Ezemvelo on May 12, 2021, after members of the local Biliya community damaged the fenceline during a protest.

An article published by News 24 on May 13, 2021, reported that protestors had destroyed more than a kilometre of fencing worth millions of rand at Hluhluwe iMfolozi.

The footage was taken by a holidaymaker at the end of a five-week stay in South Africa’s Kruger National Park where they recorded a pack of 21 wild dogs chasing each other across a road in the park.

Unrest and violence in South Africa sparked by the imprisonment of ex-president Jacob Zuma last month, have escalated. As reported by AFP, South Africa’s army announced on July 12, 2021, that it was deploying troops to two provinces (Gauteng and KwaZulu-Natal -- where Zuma was jailed), as well as the economic hub of Johannesburg, to help quell mob violence and looting.

At least 45 people had been killed in the violence, and more than 750 people were arrested. 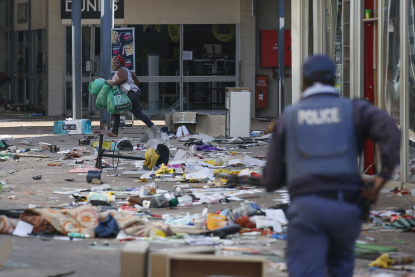 A looter smiles as she runs away from a member of the South African Police Services inside in Katlehong township, East of Johannesburg, on July 12, 2021. ( AFP / PHILL MAGAKOE)

On June 29, the country’s top court sentenced Zuma to a 15-month term for refusing to comply with a probe into the corruption that stained his nine years in power. An application by Zuma for the court order to be rescinded is pending.

While some of the protests appear to have been triggered by Zuma’s incarceration, they are also taking place against a backdrop of steep unemployment and hardship inflicted by the toughening of Covid-19 restriction measures in South Africa.

South Africa’s President Cyril Ramaphosa asked people to “refrain from posting and circulating inflammatory messages on social media, and from spreading rumours or false reports that may create further panic,” in a televised address to the nation on July 12, 2021.