A voice note posted on Twitter and shared hundreds of times claims that the South African Police Service (SAPS) solicited help from the public in quelling bouts of unrest that have engulfed parts of the country, even going so far as sanctioning the use of deadly force. But the claim is false: the police, who are working together with the army, have not issued any statement asking for help from armed civilians.

“Army has just been deployed now ... The police have put a thing out to say armed civilians please come and assist all areas and, yeah. Shoot to kill, basically. So yeah, at least everyone is doing something, hey,” an unidentified woman says in the voice note. 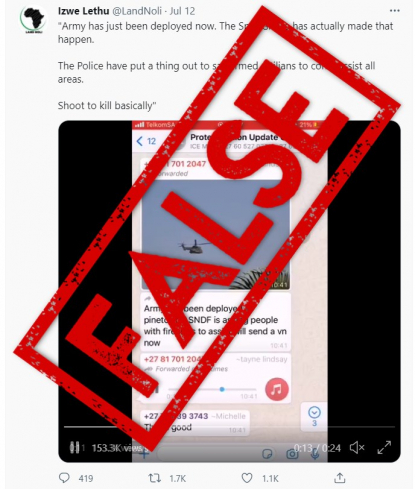 The person who tweeted the audio file denied it was her voice in the recording.

“Hello everyone, I did not make the voice note, I only shared the voice note, having only listened to the first half and not the last, I apologise,” she wrote on Twitter.

The message appears to have originally circulated as a screen recording of a voice note shared in a WhatsApp group.

Some people commenting on Twitter responded to the contents of the voice note with shock. 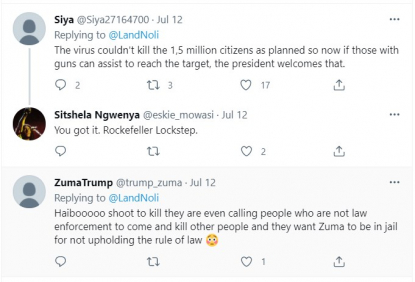 Screenshot showing comments on the tweet, taken on July 15, 2021

However, the claim that the police asked armed civilians to help contain the chaos by giving them shoot-to-kill orders is false.

No call for civilian assistance

Police denied issuing any statement seeking the help of armed civilians and warned people not to take the law into their own hands.

“The police did not ask armed civilians to shoot and kill protesters, that’s criminal,” said police spokeswoman Themba Lirandzu. “Anyone taking the law into their own hands will be arrested.”

Unrest erupted in KwaZulu-Natal and Gauteng provinces in South Africa on July 8, 2021, as rioters looted shops, burnt buildings and cars, and set up blockades on major roads.

AFP reported that the disorder could lead to food and fuel shortages in the country as the manufacturing, farming, and oil refining industries were badly disrupted.

More than 100 people have died as a result of the trouble and another 1,200 have been arrested, according to official figures.

With police overwhelmed by the chaos, communities in the affected provinces (and elsewhere in the country) banded together to protect businesses and properties. 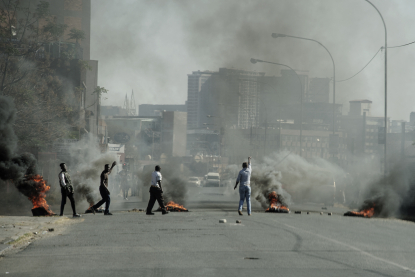 In addition, the army was called in to help police and on July 14, 2021, the South African government said it had increased the number of troops on the streets to 25,000 — 10 times more than had initially been deployed.