A graphic has been shared repeatedly in multiple Facebook, Twitter and blog posts in the Philippines that purports to show a list of “killer foods” identified by the World Health Organization (WHO). The graphic, however, was not produced by the UN’s international public health agency, a WHO spokesperson told AFP. As of April 1, 2021, the WHO has not released any advisories on so-called “killer foods”. 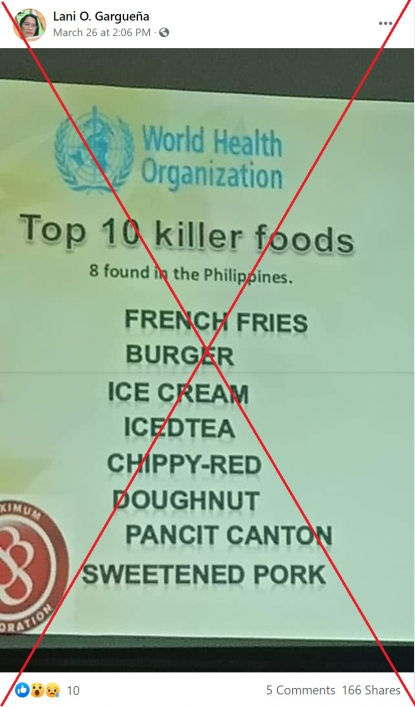 A screenshot of the misleading post, taken on March 31, 2021

The post circulated online as the Philippines confronts a growing obesity issue, with the consumption of processed foods steadily rising, as noted in this UNICEF study released in March 2021.

The purported WHO graphic was also published here and here on Facebook, here on Twitter, and in this blog.

The graphic, however, is fake.

“​WHO is aware of reports of a fake list of deadly foods that is circulating online,” a WHO spokesperson told AFP in a Viber message on March 30, 2021. “This list is not from WHO and should not be shared.”

The WHO previously refuted the claim in July 2016, tweeting it “has never declared a list of 10 killer foods.”

Multiple keyword searches on Google found no lists of “killer foods” published on any official WHO website or social media channel.

Food safety and nutrition are frequent topics that emerge in online misinformation. AFP has previously debunked misleading claims about the safety of consuming certain products, including the food additive MSG and food-grade wax used on apples.