Skip to main content
Meat products for sale hang on display at a market in Manila on August 7, 2014. (AFP / Jay Directo)

Multiple posts shared tens of thousands of times on Facebook and Twitter since 2016 claim the Philippine Food and Drug Administration (FDA) “confirmed” the food flavouring monosodium glutamate (MSG) is "a silent killer". The posts omit important context: the FDA has maintained in multiple issuances since 2006 that MSG is safe for consumption. 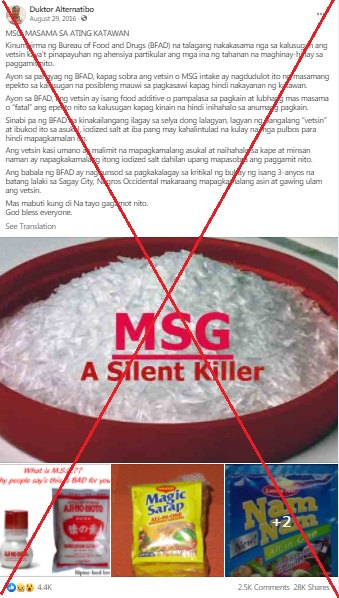 A screenshot of the misleading post, taken on October 15, 2020

The post states in part: “The Bureau of Food and Drugs (BFAD) has confirmed that 'vetsin' is really bad for the health, and is advising mothers particularly to slow down on its use. According to a BFAD statement, too much intake of 'vetsin' or MSG causes adverse effects on health that could lead to death if the body is not able to cope. According to BFAD, 'vetsin' is a food additive that has extremely harmful or 'fatal' effects to health if consumed without mixing with any food."

The post also includes photos of several MSG products, one of which is overlaid with text that states: “MSG / A Silent Killer”.

MSG, known in the Philippines as “vetsin”, is a flavour enhancer -- a white or off-white crystalline powder used to add flavour to food.

This report, posted August 3, 2008 on the website of local news organisation Philstar.com, also contains an identical claim but without photos of MSG products.

Yet these posts omit important details about MSG.

In response to the posts, Dr. Eric Domingo, FDA director general, sent AFP this 2006 issuance that lists MSG among “additives permitted for use in food in general”.

“This is the latest about MSG and it still holds,” Domingo said in a Viber message on October 15, 2020.

Screenshots of relevant portions of the FDA issuance, taken on October 15, 2020

This 2013 FDA issuance reiterates MSG is “safe” and among the list of permissible food additives.

The same advice about MSG safety is also reflected in this US FDA page, which states: “FDA considers the addition of MSG to foods to be ‘generally recognized as safe’ (GRAS). Although many people identify themselves as sensitive to MSG, in studies with such individuals given MSG or a placebo, scientists have not been able to consistently trigger reactions.”