Three photos have been shared thousands of times in Facebook posts that claim they show Thai pro-democracy protestors throwing shoes and water bottles at the Queen's motorcade on October 14, 2020. The claim is misleading: an analysis of the photos found they do not show any objects being thrown at the vehicle; corresponding videos of the car, which was transporting Thailand’s Queen and Prince, do not show any items thrown at the vehicle; AFP’s journalists and local reporters at the scene said they did not witness items being thrown at the royal motorcade.

The photographs and claim were posted on Facebook here on October 14, 2020. They have been shared more than 10,000 times.

The post’s Thai-language caption translates to English as: “Tears rolling down my cheek, because we were unable to ‘protect’ from water bottles to shoes that were ‘thrown’ towards the car, all we could do was ‘shout’ long live (the queen).” 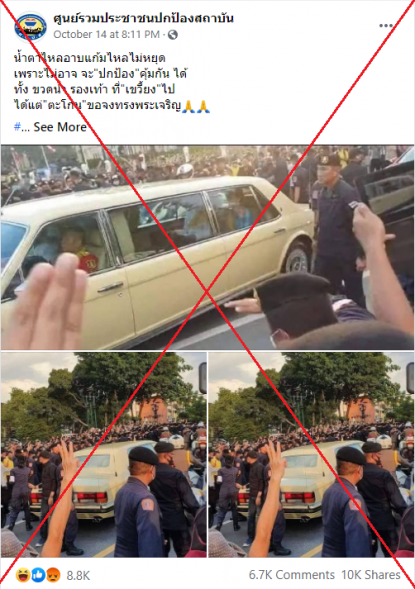 Thailand has seen months of pro-democracy protests, targeting both the government of Prime Minister Prayut Chan-O-Cha, a former army chief who initially took power in a 2014 coup, and the monarchy, AFP reported here.

Two activists were arrested Friday over the motorcade incident, under a rarely-used law banning violence against the queen, AFP reported here.

Similar claims and images purporting to show that protesters had thrown objects at the royal motorcade were also shared on Facebook here and here.

A close analysis of the images did not identify any objects being thrown towards the royal motorcade in any of the photos.

Protesters can be seen making the three-fingered salute -- a gesture of defiance the pro-democracy movement has borrowed from the popular "Hunger Games" books and films.

Corresponding videos posted on social media of the royal motorcade passing through the crowd on Phitsanulok Road, in front of the Government House in Bangkok here on October 14, 2020 also do not show objects being thrown at the vehicle.

This 35-second video published on Twitter on October 14, 2020 does not show any objects being thrown.

Below are three screenshots from the Twitter video which show the vehicle passing through the crowd:

This video published on Twitter on October 14 also does not show any objects being thrown at the motorcade.

AFP journalists working at the scene also did not witness any objects thrown at the royal motorcade.

AFP photographer Mladen Antanov told AFP Fact Check that he had not seen anything being thrown at the royal motorcade.

"I was stationed here when the motorcade was passing through. There were monarchists making line to let the motorcade pass, with pro-democracy protestors behind them, with some of them holding up three finger sign. From what I could see, there were no items thrown at the car," he said.

Below are AFP photos of the motorcade passing through the crowd on October 14, 2020:

Pravit Rojanaphruk, a reporter for Thai newspaper Khaosod, posted on Facebook here on October 15, 2020, saying he witnessed “no attempt to block, hit or throw objects at the beige Rolls Royce where the Queen and the Prince were inside.”