Georgia runoff counts were corrected on TV, are not evidence of fraud

Social media posts claim clips from US broadcasters ABC and CNN provide evidence of election fraud in the Georgia Senate runoff races. This is false; the changes to the vote totals displayed in the TV clips are the result of corrections by Edison Research, the firm that provided election data to both networks, and were not recorded in any official counts.

“GEORGIA They still haven’t explained negative votes because the explanation is fraud. 32,400 votes taken from David Perdue live,” a January 6, 2021 tweet that includes a clip from ABC.

It is followed by another tweet with a second clip from the channel that allegedly shows “another 5,000 votes subtracted” from Perdue, a Republican. 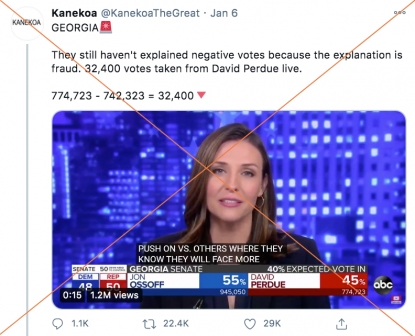 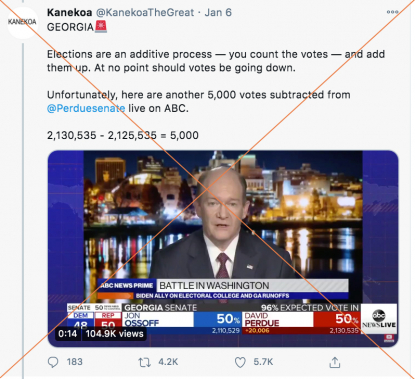 The same claims were shared on social media here, here, here and here, all using clips from ABC and CNN, as Democratic candidates Jon Ossoff and Raphael Warnock neared crucial victories in the races for Georgia's US Senate seats.

The candidates’ wins handed control of the upper house of the US legislature to Democrats, while President Donald Trump’s supporters, driven by his repeated false claims of vote fraud, launched a violent assault on the US Capitol, disrupting Congress’s session to certify Joe Biden’s victory and plunging part of Washington into chaos.

Although the footage used in the posts is genuine, the accusations of fraud are false.

Ari Schaffer, press secretary for Georgia secretary of state, told AFP over the phone that the official state counts did not reflect any drops in votes.

Both errors originated from Edison Research, the firm that gathered election data, and which ABC News and CNN use as the source for their election updates.

“Not the things that got us much attention in normal times. Just quality control on two reports out of the thousands we collected,” he said by email.

The first error happened in Bibb County at 8:15 pm local time on January 5, according to Farbman.

“The vote drop for Perdue happened after we corrected an error that had erroneously added 32k to Perdue’s vote count in Bibb county. The incorrect vote was entered by a data entry operator reporting results collected by an Edison reporter stationed at the Bibb County Office,” he said.

“This error was obvious to our quality control team and corrected within 5 minutes,” he added.

Edison Research’s teams first removed the error and later updated the numbers with the correct counts. As ABC News and CNN were using the firm’s data, the incorrect vote counts were briefly broadcast on television before being withdrawn, causing the apparent “reduction” in votes.

The second error came from Dekalb County, and happened at 11:20 pm local time the same day. “The vote drop of 5k votes for Perdue was a data entry error from a reporter in Dekalb County where a ‘3’ was read as an ‘8’ and led to a 5k error,” Farbman told AFP.

AFP Fact Check has debunked repeated unfounded allegations of fraud from Trump and his supporters.