Donald Trump’s son Eric claimed on Twitter that 80 ballots cast for the president were burned. This is false; the City of Virginia Beach said they were sample ballots, not ones used by voters.

“Burning 80 Trump Ballots,” Eric Trump wrote in a November 4, 2020 tweet that has been retweeted more than 30,000 times, spreading a claim from a now-suspended account that included a video clip of the alleged incident, which is no longer viewable.

Donald Trump, his campaign and his supporters have repeatedly made unfounded allegations of 2020 election fraud, and such claims continue to circulate online as ballots are counted in key battleground states that will determine who wins the presidency.

The ballot burning claim was also made on Facebook here and on Instagram here, accompanied by what seems to be the same video spread by Eric Trump, who is executive vice president of the Trump Organization, the family business.

“Donald Trump, gotta do what you gotta do,” a person says in the video while holding up what appears to be a ballot, before placing it in a plastic bag.

“Got around 80,” says the person, who then lights the bag on fire.

But the documents in the bag were not ballots completed by voters.

The City of Virginia Beach responded to Eric Trump’s tweet, saying: “Those were sample ballots,” and linking to a statement. 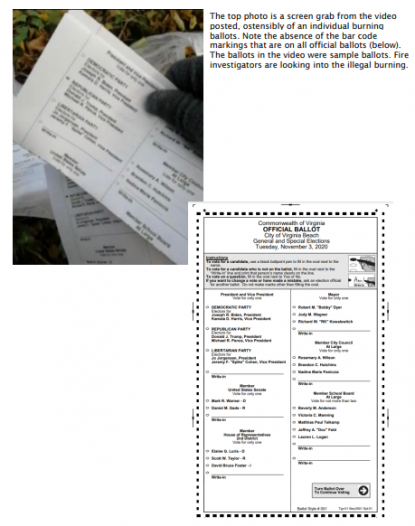 A screenshot of an image comparison from the City of Virginia Beach, taken on November 5, 2020