Social media posts shared after supporters of Donald Trump broke into the US Capitol claim Vice President Mike Pence unfollowed the president and changed his Twitter banner to an image of Joe Biden and Kamala Harris, signaling a rebuke for the White House incumbent and support for the incoming Democratic administration. This is false; Pence was still following Trump on the social media platform as of January 7, 2021 and the image in question shows the vice president and his wife, not Biden and Harris.

“Mike pence breaking up w trump,” one January 6 tweet reads. “he changed his banner to biden and harris and unfollowed him.” 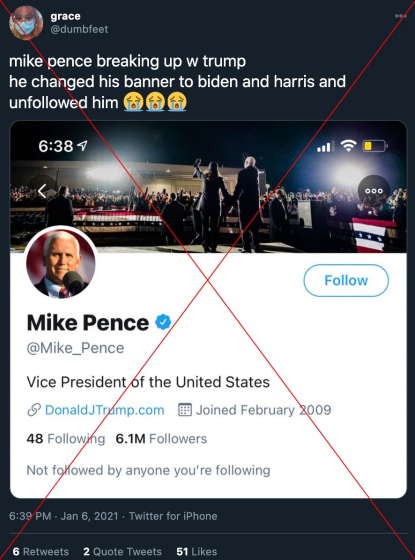 Trump’s supporters stormed the Capitol on January 6 in an unprecedented attack that led to one woman being shot and killed by police. The mayhem forced the suspension of a normally ceremonial procedure to certify Biden's election victory, bringing disorder to the bed of US lawmaking.

Trump, who had addressed supporters and urged them to march on the Capitol, later released a video on social media in which he repeated his false claims of election fraud -- even telling those assembled, “we love you.”

Trump blasted Pence when he refused to intervene in the certification by Congress.

“Mike Pence didn't have the courage to do what should have been done to protect our Country and our Constitution,” Trump tweeted. “USA demands the truth!”

In defiance of his boss, Pence condemned the unrest at the Capitol. Congress formally certified the electoral vote tally of 306 for Biden against 232 for Trump.

The claims of Pence distancing himself from the president on Twitter were also shared on Facebook here and here, some with screenshots of a post shared by a Canadian reporter who tweeted the claim before later correcting herself and deleting it.

Users on both sides of the aisle shared the claims -- some expressed mirth at the apparent rupture and others deemed Pence a “traitor” or said the move means “we’re at war.”

Several users pointed out that the claims were dubious, and corrected posters.

Screenshots of some of the accounts Mike Pence follows, taken on January 7, 2020

The banner on his individual account shows a man and a woman holding hands and waving to a crowd, many of whom are wearing red hats -- often an indication of Trump support.

Searching Google for Trump rally images of the vice president and the second lady yields this Detroit news article with an image of Karen Pence wearing the same outfit as pictured in the banner, captioned: “Vice President Mike Pence and his wife Karen wave before President Donald Trump arrives at a campaign rally Monday, November 2, in Grand Rapids.”

It is credited to Carlos Osorio from the Associated Press (AP).

Searching AP’s images for that rally indicate that the fabric surrounding the stage is the same as pictured in Pence’s banner.

The letters “GHT” are visible on a building in front of the duo, just over the man’s right shoulder.

Full footage of the rally is available on C-SPAN here.

Twitter has pulled a video from the president’s account and Facebook has taken unusually strong action by indefinitely blocking Trump from its platform, citing the president’s fueling of unrest and false claims of election fraud.

Speaker of the House Nancy Pelosi and Senate Minority Leader Chuck Schumer have called for Trump’s removal over the events at the Capitol.

“What happened at the US Capitol yesterday was an insurrection against the United States, incited by the president,” Schumer said in a statement. "This president should not hold office one day longer.”

Trump has since pledged an “orderly transition” of power on January 20, when Biden will be inaugurated. But when doing so he again did not formally concede or acknowledge that he lost the election.