Skip to main content
A protester, who claims to be a member of the Proud Boys, confronts police officers as supporters of US President Donald Trump protest outside the US Capitol on January 6, 2021, in Washington, DC (AFP / Alex Edelman)

Police did not assist Antifa during US Capitol assault

Tweets and Facebook posts claim that police officers escorted left-wing activists into Washington on the day that the US Capitol was stormed. This is false; the video used as evidence was taken in December 2020 in Minnesota, and when asked by AFP about the allegation, a spokeswoman refuted the suggestion that any officers had provided assistance to supporters of Donald Trump who ransacked the home of US democracy.

As footage of Trump supporters rushing into the US Capitol flooded social media, online posts shared a video alongside the claim it shows “Antifa being escorted into DC by police ahead of Jan 6th MAGA Stop The Steal rally” that day.

Antifa, short for anti-fascist, is a structureless ideology dedicated to fighting fascism online and in public spaces. Numerous online publications have inaccurately blamed the movement for the storming of the Capitol, which followed a speech by Trump in which he encouraged those listening to march to the building and oppose lawmakers gathered to certify Joe Biden’s November 3 election victory.

In the video, a man explains that members of Antifa and Black Lives Matter were bussed in by state troopers in their vehicles, before showing footage of several large vehicles driving down a city street from his phone. 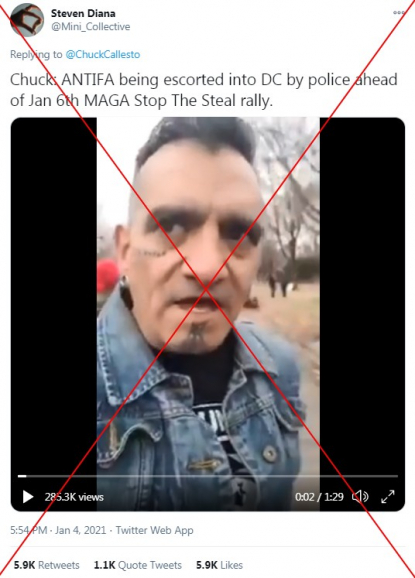 The video and its caption suggest that the scenes of lawlessness took place in Washington and were committed by members of those groups, and that police were complicit. This claim was made on Twitter and Facebook, sometimes without the video.

However, police said the claim is false.

“The Metropolitan Police Department does not act in the capacity of private security for any group,” Alaina Gertz, a spokeswoman for the Washington DC police force, said by phone. Gertz did not wish to comment on the political inclinations of individuals who stormed the Capitol.

The man talking in the video does not mention the District of Columbia, which does not have its own state troopers. When the mob storming the Capitol turned violent, New Jersey, Virginia and Maryland sent their own state police at the request of DC officials.

A search for the words “Antifa escort” in tweets with videos before January 3 shows that the video was published as early as December 8, 2020, when someone uploaded it on Twitter with the caption “#StPaul #Minnesota on 12/5/20 This guy witnessed #Antifa #BLM being bused in for the #Rally with a police escort.” 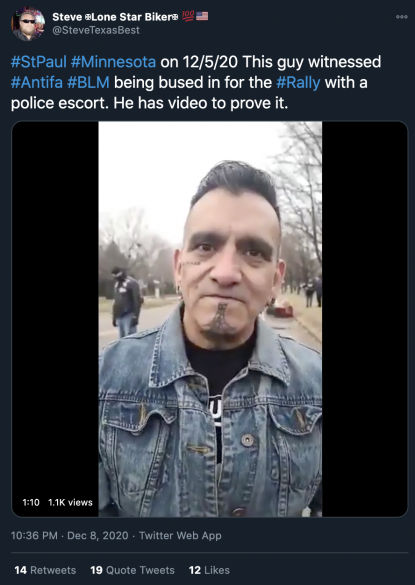 On December 5, 2020, Trump supporters organized a rally in St Paul, Minnesota, in front of governor Tim Walz’s house, to protest Covid-19 restrictions. Local left-wing organizations arranged a counter-protest due to the alleged presence of right-wing militias.

Local media reported that police and state troopers formed a line to separate the protesters and counter-protesters on the intersection of Chatsworth Street and Summit Avenue.

The weather, the surrounding trees, as well as the uniforms of the state troopers (0:52) and the low and high traffic fences in the Twitter video all match other footage of the event.

Detailed YouTube videos showing footage of the protest from various angles do not show any Minnesota state troopers escorting or assisting the crowd of left-wing demonstrators, most of whom brandished homemade shields as they faced the right-wing protesters, some of whom had come with weapons. Nobody was injured, according to the police, though cars belonging to the protesters were damaged.

Minnesota State Patrol did not respond to AFP requests for comment by the time of publication.

Certification of Biden’s victory was delayed by the violence in Washington. But lawmakers later regrouped and his victory was confirmed, paving the way for Trump’s exit from the White House.

AFP Fact Check has debunked a series of other false or misleading claims related to the 2020 election here.