Facebook posts inviting small business owners impacted by Covid-19 in Africa to apply for loans from the World Bank through the International Finance Corporation (IFC) have been shared hundreds of times. But the claim is false; the World Bank confirmed to AFP Fact Check that the posts emanated from fraudulent accounts linked to cybercrime attacks targeting the institution.

In Kenya, the claim was published on Facebook pages (here and here) registered in the name of the country’s Sports Minister, Amina Mohammed.

“World Bank frustrated at low uptake of Covid fund,” read the posts, which have since been removed from Facebook. “The World Bank has complained of the low number of Kenyans applying for the Covid fund which was approved all the way in May. The fund was meant to cushion small businesses against shocks caused by the pandemic but most Kenyans have shied away from applying. Kenyans willing to apply for the fund can do so only through IFC website.”

IFC is the International Finance Corporation, a member of the World Bank Group.

Mohammed was also cited by Kenya’s People Daily, an online news site, in connection with the purported financing arrangement, while in Namibia, a similar claim was published here by an account created under the guise of the country’s finance ministry, which Facebook’s transparency information shows as being administered from Kenya.

Links included in the posts supposedly lead potential applicants to the IFC website and a page with a form where they are invited to fill in their details.

While the page appears to be official, on closer inspection the entire website is nothing more than a sophisticated clone of the real thing.

Searching the URL provided in one of the posts on GoDaddy, an American internet domain registrar, reveals several suspicious details: the site domain was created on October 16, 2020 – just three days before the first of the false posts was published. Additionally, the domain is also registered in Kenya, while the World Bank has its headquarters in the US. 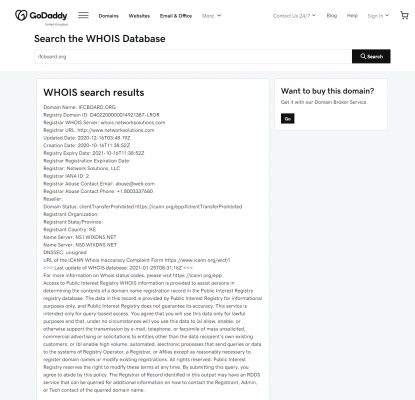 A screenshot of GoDaddy results, taken on January 25, 2021

A GoDaddy search of the link supplied in the post targeting Namibians reveals that this URL was registered on November 24, 2020, about a month before the false claim was shared on Facebook. The country of registration is indicated as Canada. 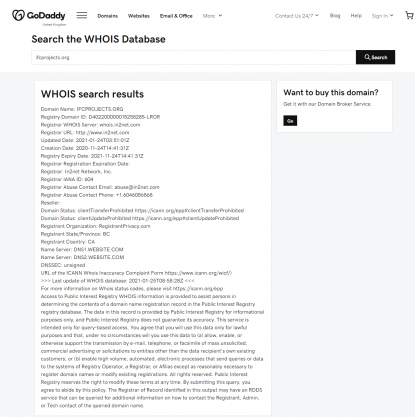 A screenshot of GoDaddy results, taken on January 25, 2021

The IFC’s authentic website – www.ifc.org – was created in December 1995 and registered to the World Bank in the US.

Melissa Bryant, a spokeswoman for the World Bank, dismissed the Facebook posts as “fake”, noting that the fraudulent URLs were part of a larger cybercrime attack on the financial institution.

“The stories and their content are inaccurate,” she said in an email to AFP Fact Check. “The World Bank mention originated on fake social media postings and websites that were part of a broader cybercrime attack against the World Bank Group.”

This statement warning the public about the fraud was published on the real IFC website.

Sports minister Mohammed’s chief of staff, Rose Wacuka, also told AFP Fact Check that the Facebook accounts linked to the minister were “fake”. Her authentic account can be found here.

Mohammed’s page differs from the imposter accounts in notable ways: firstly, her page contains the prefix “Amb” for “ambassador” in the name (Mohammed was formerly a diplomat), which the others don’t.

Screenshots of the impostor Facebook page and the authentic one reveals different titles for the minister. Screenshots taken on January 22, 2021 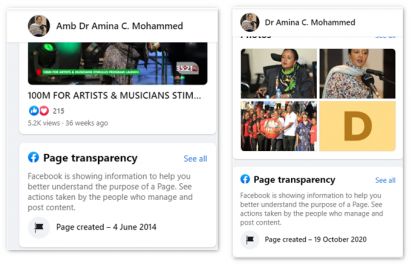 Screenshots of the impostor Facebook page and the authentic one show different dates for when the accounts were created. Screenshots taken on January 22, 2021