Skip to main content
Soldiers wearing facemasks stand guard on road leading to a quarantine faciltity (R) for people returning from Iran via the Pakistan-Iran border town of Taftan to prevent the spread the COVID-19 coronavirus, in Sukkur in southern Sindh province on March 17, 2020. (AFP / Shahid Ali)

An image has been shared hundreds of times in multiple posts on Facebook and Twitter that purports to show a tweet from US media organisation CNN stating the "actual range" of Pakistani Shaheen-III missiles is 5,770 km. The posts circulated within two days of the Pakistani military announcing it had conducted a "successful flight test of Shaheen-III surface to surface ballistic missile". The claim in the posts is false: CNN told AFP that the purported tweet had been fabricated. There was no record of the purported tweet on Twitter or Google, nor did its formatting correspond with genuine tweets from CNN.

The image was published here on Facebook on January 22, 2021. It has received almost 400 likes.

The Facebook post’s Urdu-language caption translates to English in part as: “We even said before that the range of the Shaheen-III missile is over five thousand kilometers because the one who is most afraid of it is Israel. If the range was actually 2700 kilometers, then this missile was no threat to Israel”.

The post circulated online just two days after the Pakistani military announced on January 20 that it had successfully tested a “Shaheen-III surface to surface ballistic missile” that had a “range of 2750 kilometers.” Here is the announcement about the test missile launch on the official Facebook page for Pakistani military spokesman Major General Babar Iftikhar.

"That is a fake tweet. It’s been doctored and CNN did not tweet that. (It’s not even in Twitter’s font),” a CNN spokeswoman told AFP by email on January 26, 2021.

While there was no timestamp for the purported tweet, the CNN Breaking News account also did not report on the Shaheen-III missile test in the days following the event.

Typically, CNN's Breaking News account posts tweets with live videos or a link to a story on its website, as seen here, here and here. The fabricated tweet did not include a link to the CNN website.

Below is a screenshot comparison of the fabricated tweet (L) and some genuine tweets from the CNN Breaking News account (R): 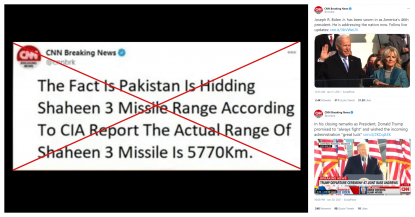