Skip to main content
Pakistani Prime Minister Imran Khan (L) and his Malaysia's counterpart Mahathir Mohamad (C) along with other officials look at a jets performing during the Pakistan Day parade in Islamabad on March 23, 2019. (Photo by FAROOQ NAEEM / AFP)

Multiple posts on Facebook and Twitter claim that the Pakistani government has appointed a retired army general as the head of the Pakistan Medical Commission (PMC), a regulatory agency that oversees the county’s entire medical profession. The claim, however, is false; the claim was made in a hoax news report and the government has made no such appointment.

The claim was published on January 21, 2021 a Facebook page called “Vocabulary and Dawn News’ Informative Articles”, which has more than 50,000 followers.

The page's profile picture is identical to the logo of major Pakistani English-language newspaper Dawn, which can be seen here. 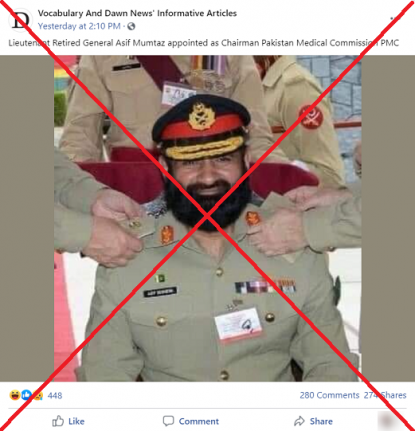 A reverse image search found that the photo of Sukhera shared in the posts is from an army ceremony in 2016. It was published on an official Pakistani military Facebook page here on August 26, 2016. 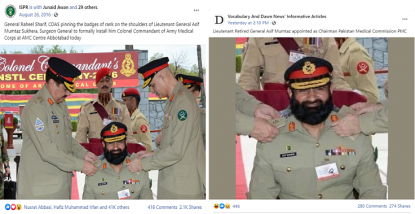 Moreover, the PMC is led by a president and not a chairman, as the posts claim.

The current president of the commission is Dr Arshad Taqi, as noted on the PMC’s website here. 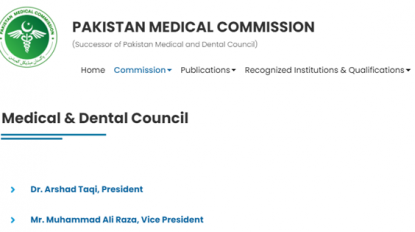 A screenshot taken on January 25, 2021, of Pakistan Medical Commission website

Sukhera, however, is currently serving as a member of Pakistan's Higher Education Commission, as noted on the commission’s website.