A Facebook post claiming that the Ugandan government is offering grants to local businesses in an effort to cushion its citizens against the effects of COVID-19 has been shared hundreds of times. The claim is false; the Facebook post appears on a page impersonating Uganda’s finance ministry. The ministry has flatly denied partnering with any organisation for purposes of offering grants to Ugandan entrepreneurs in the ongoing pandemic.

This post published on a Facebook page called “Ministry of finance, planning and economic development, Uganda” on May 29, 2020, claimed to be offering a grant to Ugandan entrepreneurs.

“GOOD NEWS TO ALL UGANDAN ENTREPRENEURS. The Ministry has partnered with USAID, BACC and other International bodies in giving out GRANTS to all deserving citizens to boost your business during this time. I urge all to grab this chance," reads the post shared more than 200 times.

It also provides a link to an application form, which requires applicants to provide personal details, such as name, phone number, email address and physical location, as well as the estimated cost of the business project they want to undertake. 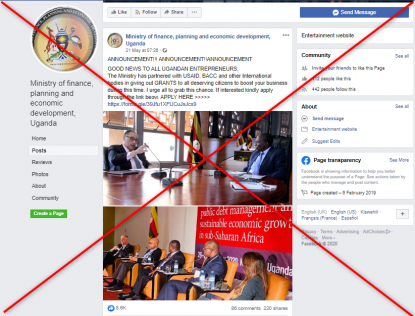 Virtually all Facebook users who commented on the post appeared to believe that the grant was genuine, with many thanking the government. 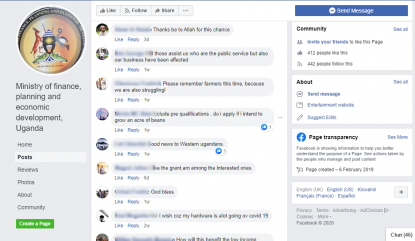 A screenshot of the comments on the false post, taken on June 5, 2020

Shortly after the Facebook post surfaced, the ministry of finance issued a warning on its Facebook page, confirming that the government was not offering such a grant.

“Do not be conned during this #Covid-19 lockdown period by online fraudsters using this fake Facebook account below. The Ministry of Finance has not partnered with any organisation for purposes of offering grants to Ugandan entrepreneurs,” the post reads.

We can also find a link to the finance ministry’s genuine Facebook page on the homepage of its website.

Economy and COVID-19 in Uganda

Ugandan President Yoweri Museveni has called on local businesses to ramp up local production in the wake of a drop in importations due to the pandemic.

In March, Museveni announced that his government was deliberating on setting up a fund with the Ugandan Development Bank (UDB), in partnership with the International Monetary Fund (IMF) and the World Bank, to accelerate industrialisation in the East African country.

Additionally, Uganda’s central bank has announced credit relief measures in a bid to salvage the economy from the effects of COVID-19. The measures include extending loan repayment periods and reducing interest rates on loans.

However, there is no announcement that the government is offering grants to business amid the global pandemic.